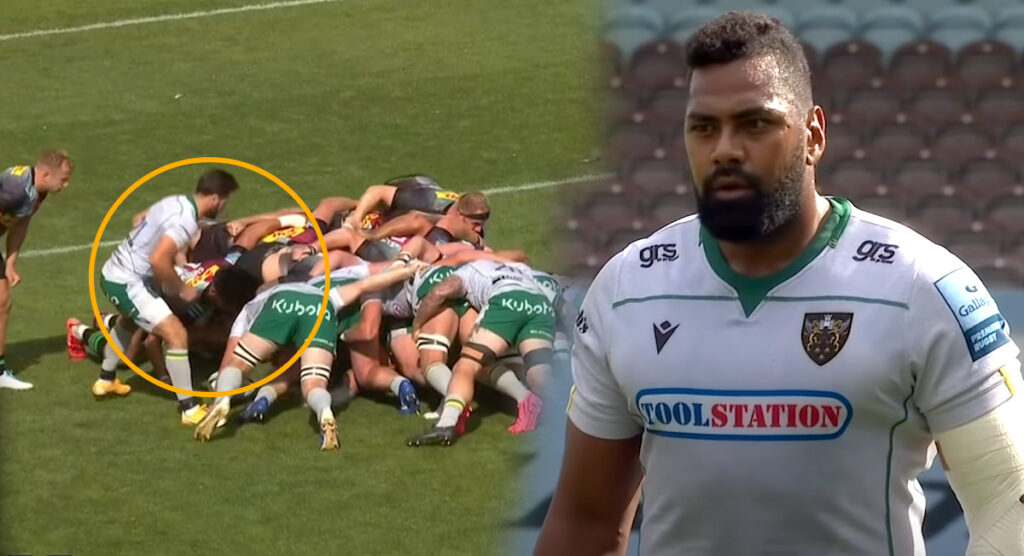 Harlequins players Marcus Smith and Will Evans, as well as head coach Paul Gustard, have discussed the brief positional switch that occurred in their match with Northampton Saints on Sunday.

Defending their own line in the dying minutes of the match, fly-half Smith packed down at blindside flanker, with Evans going the opposite direction to defend the No10 channel, a ploy that paid off.

Smith explained in a video this week the reasoning behind that decision, saying: “We saw in the week [Northampton] like sending Naiyaravoro at the fly-half, so Gussy being Gussy thought outside the box and found a way to exploit it as a positive opportunity.”

Gustard further expounded the rationale behind such a decision, where Evans won a turnover a few phases later. He said: “We felt having Will Evans there was like a Scud missile taking away the knees of the attacker.

“The pleasing thing was that Northampton recognised we made a change and in doing so they then made a change of their play and actually bypassed Big T (Naiyaravoro).

“We actually manipulated the play that Northampton were going to play.”

Such a tactic adopted by Quins is becoming increasingly common in the game, where forwards and backs switch roles at the set piece.

It has never been uncommon to see a fly-half drop to the back field when defending a lineout or scrum, allowing a more robust teammate in the backline to fill the channel, but as backs like Naiyaravoro have become increasingly regular, players from the pack are perhaps the most effective ones to nullify such a threat.

Evans himself said “you can’t be rigid in rugby, there are always ways you can get around certain situations,” succinctly summarising how players and coaches must now be malleable in their approach.

Smith even described the coaching he had received in the week from scrum coach Adam Jones, which suggests that may not be the last time they deploy such a plan.