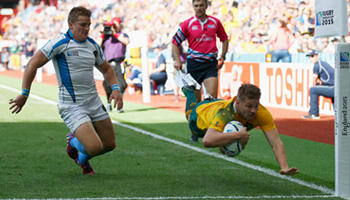 Australia scored eleven tries at they romped to a 65-3 bonus point victory over Uruguay at Villa Park on Sunday. Drew Mitchell, Ben McCalman and Sean McMahon all scored twice as the Wallabies produced the highest score of the tournament so far.

Australia’s next Pool A match is against hosts England at Twickenham on Saturday.