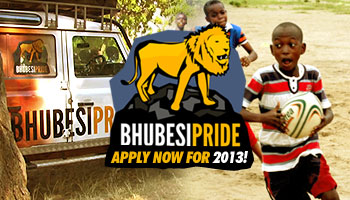 Bhubesi Pride recently arrived into Cape Town as they marked the end of a quite remarkable journey through Africa. Today we take a look at the latest updates, and provide information on how you can make a difference, and be part of the 2013 team.

On the 9th January, Bhubesi Pride – an initiative set up to promote the game of rugby and its values in Africa, addressing UN millennium development goals – left London and headed 10,000km south to Addis Ababa in Ethiopia, where its rugby coaching mission officially began.

Over the months that followed, the coaching team moved into Kenya, Uganda, Rwanda and Tanzania, continuing their strategy to unite, empower and inspire communities through the wonderful game of rugby union.

When we last caught up with the Pride, we brought you two of their initial tour videos, including coverage from the aforementioned countries. Rugbydump is proud to be involved in Bhubesi Pride’s official project videos so today we present you with Part Three and Part Four videos from Rugby in Africa, including coverage from Tanzania, Malawi, Zambia, Botswana, Namibia and South Africa!

The playlist below features the latest two videos, starting with Bhubesi Pride’s most recent activities in SA, where the team finished their rugby coaching mission, watching the third South Africa vs England Test from the comfort of SARU’s presidential suite at the Nelson Mandela Bay stadium.

If you think YOU could build on the success of this year’s project work, being a key member of the 2013 expedition coaching team through Africa, Bhubesi Pride’s application process is open until the 5th August. Get your application in now to be considered for next year’s team!