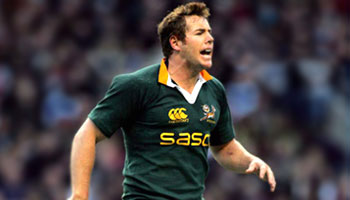 Springbok and Sharks flyhalf Butch James has always had a reputation for putting the shoulder in on players, normally resulting in trouble for being too high or without the use of his arms.

A few years back he was infamous for it. He had a reputation for being a dirty player and refs started to pick on him because of his past indiscretions.

An advert even came out on local tv about it, showing him giving blood, with him saying “Use your arms”. Those bad rep days seem to be over though. He’s found form with the Sharks and is almost a certain choice for the World Cup squad.

His tackling has also come right, with him still being a physical player, but keeping on the right side of the law, as seen below with this fantastic hit on Stirling Mortlock in the 2006 Tri Nations.

He got it spot on. Great camera work too.