Calls for consistency after Tuilagi red card and Parkes tackle 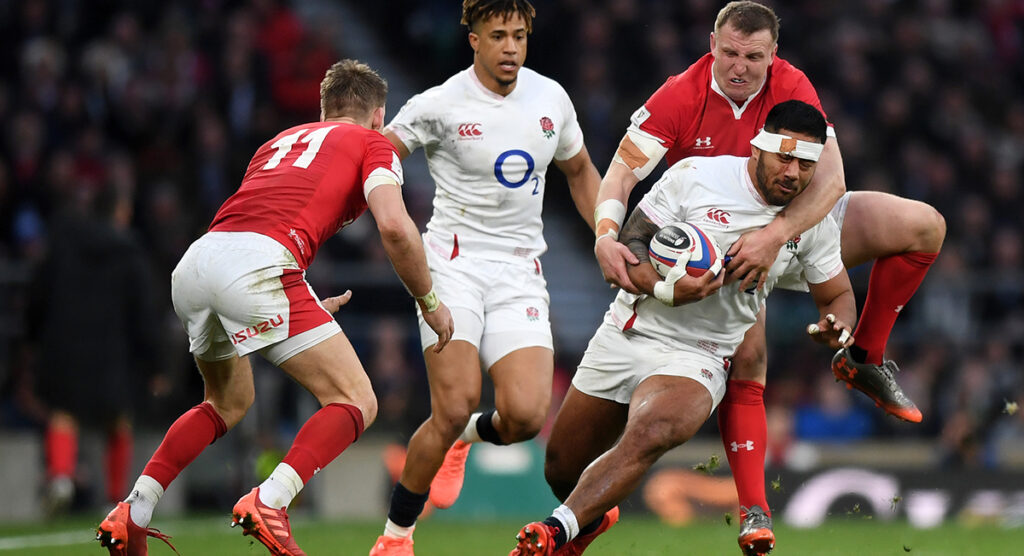 In a weekend of red cards, the Six Nations has left plenty to be debated about over the coming days.

Manu Tuilagi’s late red card for a tackle on George North at Twickenham on Saturday is one that has divided opinion.

The outside centre was dismissed by referee Ben O’Keeffe after much deliberation for a shoulder charge to North’s head. Many have accepted that it was a red card offence, although it was mitigated by the fact that the winger was almost at ground level when the hit came in.

A red card shown to Manu Tuilagi for a shoulder charge on George North#ITVRugby pic.twitter.com/NXkmVmqfQg

What is proving to be more contentious is Hadleigh Parkes’ tackle on Tuilagi in the first half, for which the inside centre only conceded a penalty.

These two tackles looked completely different, as Parkes made a discernible effort to wrap his arms around in the tackle, but there was nonetheless clear shoulder to neck, or even head to head contact. Equally, Tuilagi’s level did not drop when being tackled, which would have made it easier for Parkes to make a legal hit.

While it was a red for tuilagi I’m surprised the Parkes challenge wasn’t looked at pic.twitter.com/NWkgJlyyZH

All rugby fans want is consistency. Tuilagi can’t tackle like that and deserved his card but how Hadleigh Parkes didn’t get a card in the first half is laughable. #ENGvWAL

Absolutely terrible refereeing all afternoon. That is never a red card and was certainly no where near as bad as Parkes on Tuilagi in the first half. Marius Jonker and Ben O’Keefe should not be in charge of a test match for a very long time. #ENGvWAL

What horrendous consistency. Parkes given nothing for a shoulder to Tuilagi's head in the first half with no mitigating circumstances. Tuilagi sent off for one on North where North is already going down. Awful, and it's Joncker as the TMO. Shock.

There are those that feel Tuilagi’s tackle warranted a yellow card only, but when compared to Parkes’ hit, it is hard to argue that there was such a gulf between the two that one was only a penalty and the other was a red card.

This has led to calls for greater consistency in refereeing. It will always be nigh on impossible to have consistency between different matches, but there is an expectation that the same standards must be adhered to across eighty minutes, and many feel that did not happen at Twickenham.

That score line massively flatters Wales. Scored 14 Pts whilst England had 13 men although credit to them, the try just after half time was superb. I agree with Tuilagi’s red under the rules but then someone explain to me why Parkes’ hit on Tuilagi wasn’t even looked at #ENGvWAL

Disgraceful lack of consistency. Does Ben O'Keefe have Wales on his coupon?! Parkes on Tuilagi worse. Clear mitigation on this one. None for Parkes. #ENGvWAL

So Tuilagi gets sent off and Hadleigh Parkes get nothing? #EngvWal

Can't disagree with the Tuilagi card, but surely a citing is due for Hadleigh Parkes for the reverse tackle earlier in the game?

I've no issue with the red for Tuilagi, but IMO Parkes' tackle was worse – Parkes didn't even try to get low and made contact with the head with his shoulder. Bans coming for both, I suspect. #ENGvWAL

The outcome of both tackles may have played a part as well in the decision making of O’Keeffe and the television match official. The Leicester Tigers centre was able to carry on moving forward after the Welshman’s hit on him. The fact that Parkes struggled to make sufficient impact on one of the strongest carriers in the game may have actually saved him.

In contrast, North lay on the floor incapacitated after receiving his tackle, which may have played on the match officials’ minds.

Based on the current tackling framework, Tuilagi’s red was perfectly justifiable and that is understandable, it is the level of consistency that is still causing problems.