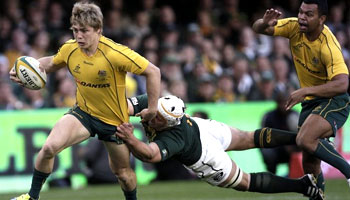 The Wallabies got a massive boost towards their Tri Nations and Rugby World Cup ambitions as they beat the Springboks 14-9 in Durban on Saturday, causing panic stations for the home side, who had picked a strong team.

Defense was a huge feature of the Wallabies play, as they took a leaf out of the All Blacks book and upped the intensity as both sides smashed into each other, causing some massive collisions. What it showed is that while they’ve always been a tremendously talented side, these Wallabies have what it takes in the physical stakes too.

The Springboks on the other side, having picked close to their strongest side possible, look rusty, with not much time left to get things together before heading off to New Zealand for the World Cup. There are also concerns over the state of John Smit, with it looking as though he will miss the test against the All Blacks.

Wallaby coach Robbie Deans was more than satisfied with the win, and their prep going forward.

“In terms of preparation there’s no doubt it’s great. We played against the most experienced Bok side tonight on their home soil and their current World Cup selection, essentially,” he said.

“I was proud of the resilience we showed. We created opportunities and didn’t finish them. It would have been easy for the group to go into decline but they stuck at it, they were good in the contact and I believe we deserved the result.”

Springbok coach Peter De Villiers felt that the Boks were in it and shouldn’t be too concerned with the result, saying that they only lost it on the scoreboard.

“We controlled the game in the first half, but it just shows that if you don’t take the chances that come your way, it is very difficult. Then again, you expect experienced guys to convert their efforts into points,” he said.

The Springboks take on the All Blacks in Port Elizabeth on Saturday.

There’s been a slight change to the normal flow of things on here, but highlights and clips from the rest of the weekend’s matches will be posted soon.