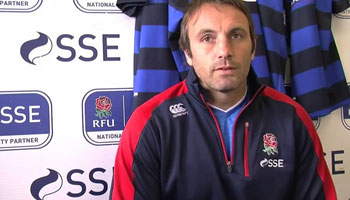 Head coach Lancaster will be joined on the training ground by coaches Mike Catt and Andy Farrell, with the latter finally agreeing to a full-time contract having performed a temporary role at the last Six Nations.

Grewcock, part of the triumphant 2003 World Cup squad, believes England now have a strong coaching set-up to go with their developing young squad as they prepare to face Fiji, Australia, South Africa and New Zealand at Twickenham in November.

He praised the work of Lancaster since taking the helm following a poor World Cup campaign last year, and welcomed the addition to the back room set-up of his former Bath team-mate Catt.

“Post World Cup there was a lot of bad press about the team and Stuart has turned that around quite quickly,” said Grewcock. “He has got a good young group of players.”

“That’s the thing in England, we have never been short of the talent it’s just trying to get them all pointing in the right direction and I think Stuart seems to have done that.

“I think it is a really exciting team and Stuart has got a good bunch of guys together.

“Catt worked with the boys on tour and is a player who is well respected, who has been there and done it in the past for England, and I think he has showed his talents as a coach with London Irish.

“Farrell is another guy really well liked by everybody. His coaching credentials in only a short space of time are pretty high with the work he has done with Sarries.

“It’s a young squad but I think they are capable of getting some good wins against the Southern Hemisphere teams.”

SSE Rugby Energy  is dedicated in helping clubs across England save money on their energy bills. To find how your club can start benefiting from these savings log-on to www.SSErugby.com