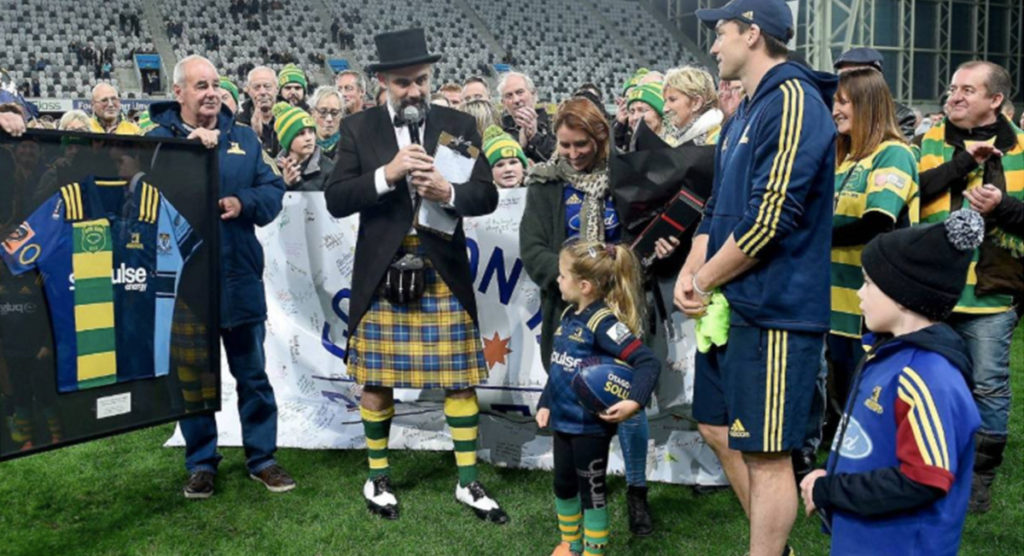 On Friday night, the Highlanders and Bulls fought to a dramatic 24-all draw at Forsyth Barr Stadium. Both Waisake Naholo and Joshua McKay were standouts, scoring two tries apiece. However, it was Ben Smith’s daughter Annabelle who stole the show by helping her famous Dad on the sidelines.

Throughout his illustrious career, Ben Smith has been the model of consistency. You’d be hard pressed to find a more unassuming world-class rugby player. He’s managed to remain the in-form All Blacks Fullback in spite of seasoned veterans, younger prodigies, and father time all nipping at his heels.

Sadly for New Zealand fans, Smith – and Naholo – will be taking their talents overseas at the conclusion of this year’s World Cup. Smith will be heading to French club Pau and Naholo for London Irish

WATCH: Schalk Brits doing what he does best in impressive 1st half vs Highlanders

Smith has been nursing a hamstring injury recently, thus was prevented from joining Naholo for one last appearance together at Forsyth Barr. However, Smith made the most of the moment and was accompanied in his water and tee duties by his daughter, who managed to upstage everyone.

Decked out in a jersey with her father’s number, Annabelle waited patiently by her father’s side as Josh Ioane lined up a conversion. It was a touching scene and a memorable moment for both father and daughter to share, as well as a great way to honour stalwart Smith.

The honours further included a presentation and the gift of a jersey with the colours and emblems of the Otago, Green Island, Highlanders, and Kings High School teams he’s played for.