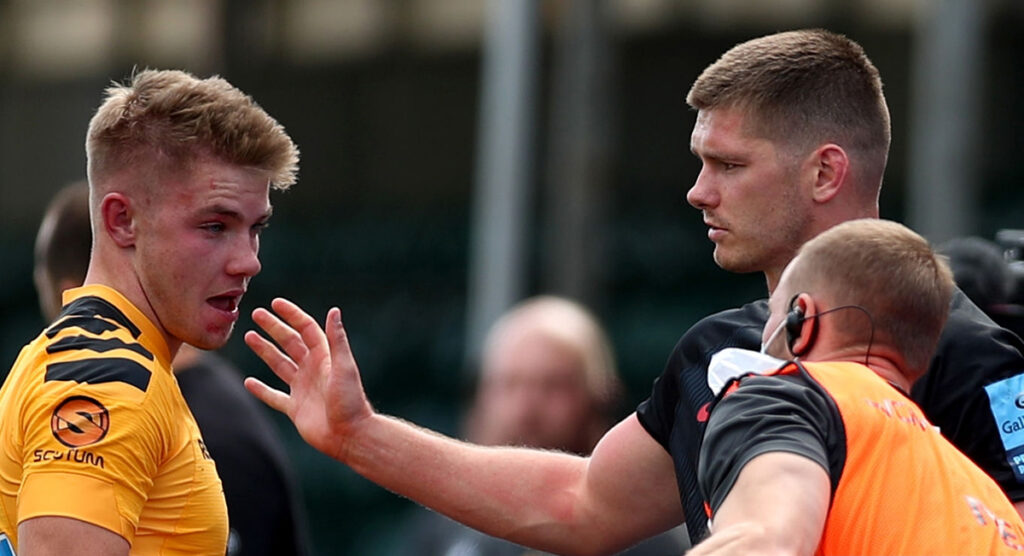 The decision to reduce Owen Farrell’s ban from ten weeks to five based on various testimonials has not gone down very well. The Saracens fly-half was handed the ban on Tuesday evening by an independent panel for his red card offence in Saturday’s contest with Wasps.

The panel deemed the high tackle on Charlie Atkinson “reckless and not intentional”, which led to the ban.

However, independent panel chair Mike Hamlin said: “Testimonials provided by Mark McCall, Eddie Jones and the founders of a charity with which the player works very closely were of the highest quality,” which resulted in the ban being reduced to five meaningful matches.

This has caused quite a stir on social media, with many disgruntled people feeling his charity work is irrelevant when it comes to dangerous play on a rugby field. In a collision that left Atkinson unconscious, which many have branded as potentially “career ending”, a mass of people feel any prior charity work should have no bearing on the decision.

The input of McCall and Jones, Farrell’s Saracens and England head coaches respectively, has also been questioned as it is in both of their interests to have the ban reduced as much as possible.

While a five-week ban has clearly displeased some, there is a sense that any ban length was going to be controversial. It does not take much trawling through Twitter to see that many people were gunning for far longer bans than were perhaps unnecessary and wildly outside World Rugby’s sanctions for foul play.

But a ten week ban would not have caused as much of an outcry, as it is largely the 50 percent reduction that has incensed some, particularly when looking at the testimonials.

Farrell will be able to return from the 5th October, meaning he misses Saracens’ Heineken Champions Cup quarter-final with Leinster this month.

What have other people’s testaments and charities got to do with a decision based on what was a serious, potentially career ending, maybe worse, tackle? It was pure filth, but do some charity work and it’s ok? Nowt against Farrell but we are clearing the game up or we aren’t!

Speechless that the fact Farrell does alot of charity work has reduced punishment for (and trying to) decapitate an opponent.

Ban reduced from the entry-point by 50% after glowing testimonials from Eddie Jones and the charity Farrell works for. Yeah, there’s clearly no bias there. And back just in time to play for England. It just stinks! 💩

Meanwhile, 18-year-old replacement full-back Atkinson will not train for at last two weeks because of concussion protocols.

“It was accepted by the RFU, the player and the Panel that the offending was reckless and not intentional. This was a totally unacceptable contact with the neck/head of Charlie Atkinson as a result of a reckless tackle which had the consequences of him being knocked unconscious and sustaining a concussion.

“This resulted in the Panel concluding that this was a top end offence with an entry point of ten matches. There were no aggravating features.

“Testimonials provided by Mark McCall, Eddie Jones and the founders of a charity with which the player works very closely were of the highest quality.

“The Panel concluded that applying the off-field mitigating factors, notwithstanding his suspension four and a half years ago, the player was entitled to a reduction from 10 matches to five meaningful matches under RFU regulation 19.11.11. The player is free to play again on 5 October.”