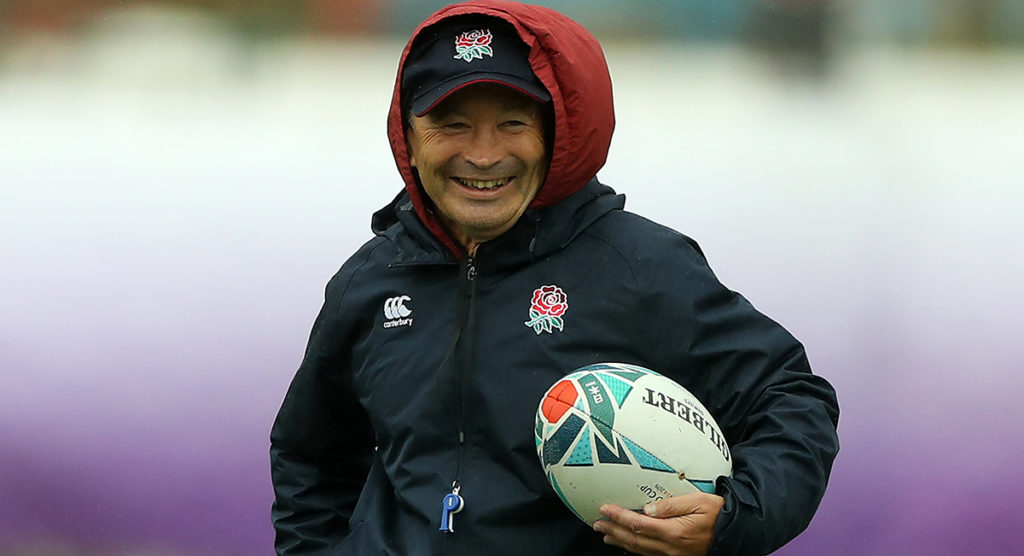 Eddie Jones may not be everyone’s cup of tea, as the outspoken coach has wound up players, coaches and fans during the last four years in charge of England.

With his side set to play the biggest match of his tenure against the All Blacks in the Rugby World Cup semi-final on Saturday, it was unlikely that he would curtail his usual style, as he has been up to his usual tricks in the hope of getting under the reigning champions’ skin.

As Steve Hansen’s side seek to win their third successive RWC, Jones insisted that all the pressure was on the All Blacks, saying:

“We get to play one of the greatest teams ever, that are shooting for a ‘three-peat’, which has never been done, so that brings an element of pressure to their team.

“They have to deal with all this pressure of winning the World Cup three times and it is potentially the last game for their greatest coach and their greatest captain and they will be thinking about those things. Those thoughts go through your head.

“There’s no pressure on us, we’ve just got to have a great week, enjoy it, relax. Train hard and enjoy this great opportunity we’ve got, whereas they’ve got to be thinking about how they’re looking for their third World Cup and so that brings some pressure.”

The former Japan boss also addressed the alleged spying that may have occurred this week, but stressed that he does not care.

Many fans from the northern hemisphere may be tired of Jones’ antics, but he is still proving to be a popular coach, partly because he provides more entertainment than the other coaches currently.

Jones has also been praised by fans on social media for alleviating any pressure that may be on his side, whilst taking a dig at his opponents by claiming their media are just “fans with keyboards”. This is what many have come to expect from Jones, and while he may be nauseating to some, there are still many that like his approach.

Eddie Jones is the only coach or player in World rugby who gives entertaining press conferences that are worth listening to. That guy is hilarious

I love Eddie Jones, what a press conference #ENGvNZL #RugbyWorldCup

Eddie Jones has completely taken the pressure off his players this week. The All Blacks is the toughest game you could get! @EnglandRugby #RWC19 #AllBlacks #Roses

Have to love Eddie Jones in the media: NZ say that walk along the street to pressure, well this week we'll be chasing them down the street with pressure! Absolutely love it, let's make sure we do it for the full 80 minutes in the match!! 🌹👏

While England are the underdogs heading into the contest with the All Blacks, they are not as much as Jones would suggest, which is all part of his plan.

Thus far he has done superbly well to create the illusion that this is New Zealand’s match to lose, and we will see on the weekend how both teams react.