England hang on for win over Italy and Grand Slam opportunity 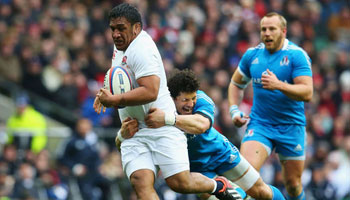 England were put under serious pressure by a determined Italy side that scored the only try of the game, but couldn’t force a late draw. The 18-11 win for England sets them up for a Championship decider against Wales in Cardiff next weekend.

England were less than convincing as an improved Italian side pushed them all the way, including a frantic last few momoments that had the home side desperately defending their line.

Flyhalf Toby Flood produced a top quality kicking display as he slotted six penalties from six attempts to set up their fourth successive win in this year’s tournament.

“It wasn’t pretty against Italy and it will be hard to watch the video back. But it was a great thing to happen in that way, so going to Wales we know there’s still a lot to work on,” said Ben Youngs.

“There’s no arrogance. Had we won by quite a few points, it probably wouldn’t have done us any favours. Sunday wasn’t exactly what we wanted but it’s the best thing to have a little scare like that and come out on top. It’s a little blessing – and slap on the wrist.

Italy got the only try of the game, and stunning score that was summed up brilliantly by flyhalf Luciano Orquera as he put in a pinpoint crosskick for Luke McLean, who finished well.