England upset the All Blacks with famous win at Twickenham 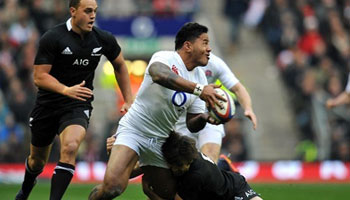 England shocked the rugby world with a highly impressive performance that blew the All Blacks off the Twickenham turf yesterday. The visitors made uncharacteristic errors and England punshed them, winning 38-21 and ending the 20-match unbeaten run.

While Owen Farrell hit the headlines earlier in the week unexpectedly, on Saturday he made it clear that he’s a force to be reckoned with when given the opportunity. The Saracens flyhalf kicked England to a 15-0 halftime lead, which included a nicely taken dropgoal.

New Zealand fought back to 15-14 through two smartly taken tries and looked as though they were kicking into gear. England didn’t take their foot off the throttle though and responded with two quick tries of their own, effectively holding off the imminent All Black comeback.

“To put that scoreline on an All Blacks side that good is way beyond what we could have asked for, but we’ve had the belief all through the week,” England coach Stuart Lancaster said post match.

Despite losing to the Wallabies and Springboks leading up to this game, England shocked the rugby world with a performance that many fans and pundits are still struggling to get their heads around.

It was England’s record margin of victory over the All Blacks, their highest ever score against them, their first win over them since 2003, and only their seventh in 35 Tests between the two nations.

It was also New Zealand’s first loss since going down to the Wallabies 25-20 in July last year.

“It’s bitterly disappointing. We struggled to get any sort of momentum and England played particularly well – credit to them,” said Richie McCaw. “You’re prepared for a big battle and that’s the way it was, they caught us on the hop. They’re a good team and they took their chances.”

Tomorrow’s Rugby World Cup 2015 Pool Allocation Draw could see England and the All Blacks placed in the same group, as Saturday’s win wasn’t enough to move England into the top four, where New Zealand, South Africa, Australia, and France occupy the crucial spots.

England are in the same tier/band as Ireland, Argentina, and Samoa, Wales dropped to ninth in the world following their loss against Australia, so will be alongside Italy, Scotland, and Tonga.