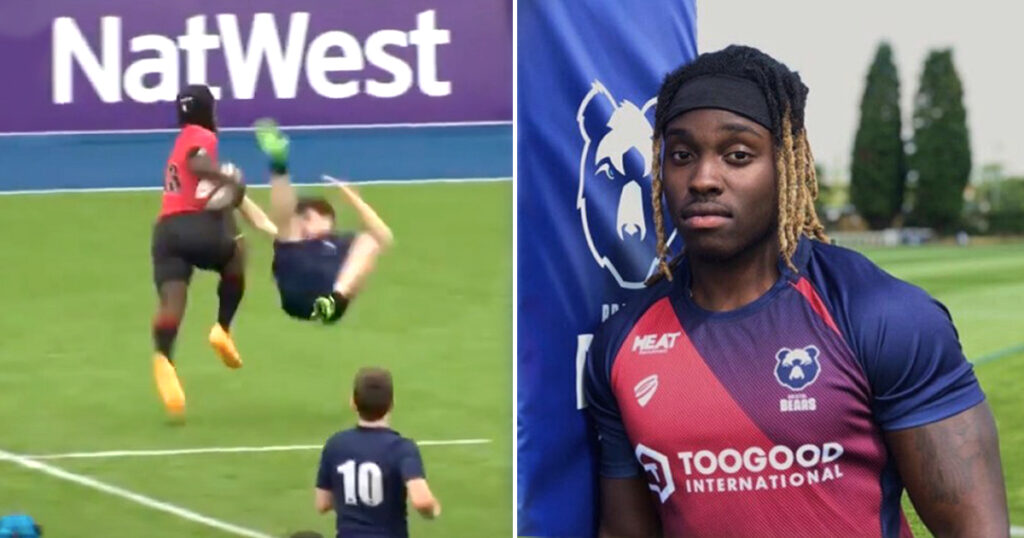 There are always cases of “what could have been” with players, who perhaps didn’t reach the heights they were tipped to achieve or indeed opt to go a different path. Tyrese Johnson-Fisher is one of those figures.

Johnson-Fisher first appeared on the scene thanks to a school rugby performance which caught the eye of England Rugby, which turned into a viral social media video.

Big things were expected of the then 15-year-old who was part of the Leicester Tigers Academy and subsequently part of the Bristol Bears squad last season.

A viral video aside, Johnson-Fisher was more of a sprinter with a passion for athletics before grabbing the attentions of several NFL sides in America.

Rugby was just one sport among many, as the now 20-year-old explained in a fascinating interview with the BBC.

“Rugby was not a sport that I was exposed to as young as many of my team-mates, perhaps I did not love it as much as they did. I was always really an athlete who was playing rugby.”

“My pass – short, medium and long – the timing of a pass, my hand-off, my high balls, my kicking, my game understanding, I only really ever understood football and athletics, not rugby.”

It’s a frustrating case of missed opportunity for the RFU, who with Johnson-Fisher, may well have boosted their own player pool with someone as naturally talented as him, as well as utilise the popularity of the viral video to build greater grassroots appeal of the game at a junior level.

But as Johnson-Fisher adds to the BBC, the stardom was somewhat imposed on him:

“Someone had sent me a message saying, have you seen this?” Johnson-Fisher said.

“For the next 30 minutes my whole Facebook timeline was blowing up with people from all different walks of life, saying ‘congratulations’ and I was still confused.

“I remember opening inboxes and I would get a lot of really nice messages, but I would also have people telling me that I would never be good enough, that I was only this and only that and it really did affect my mental health.”

It is clear in what Johnson-Fisher says that he was either not suited to rugby or simply wasn’t as passionate for the game as many of his contemporaries were. The raw skill and pace of the centre was evident, and his background and subsequent rise through the ranks was similar to USA’s Carlin Isles and Perry Baker – both of whom found professional careers in 7s after starting as sprinters.

Johnson-Fisher was quick to admit his overall game wasn’t perhaps as strong as the others, or Premiership material. But what if the RFU had used the USA’s model and progressed him through its successful 7s programme instead?

It does make you wonder.