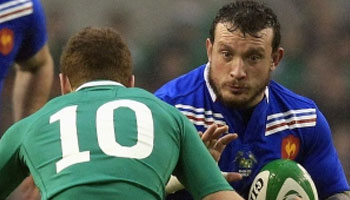 France came from behind to draw 13-13 with Ireland as they avoided a fourth straight defeat, but are still without a win with one game left in this years Six Nations championship. The two teams drew their Six Nations meeting last year too.

Paddy Jackson showed his temperament as he kicked Ireland, who had beaten France just once in their last 13 attempts, to a 10 point halftime lead after a Jamie Heaslip try.

Morgan Parra pulled things back in the second half before Louis Picamoles drove over with just six minutes left on the clock. Frederic Michalak levelled things up with the conversion.

“It was a very tough game. Picamoles took his chance well at the end and did well despite our best efforts,” said deflated skipper Jamie Heaslip post match.

“It wasn’t the prettiest game to watch. I suppose the score reflected the game,” he added.

While the pressure on both coaches will have intensified with the result, France have just one point from this year’s competition so must get a result in Paris next weekend to avoid picking up the wooden spoon.  It would be their first last place finish in the championship since 1999.