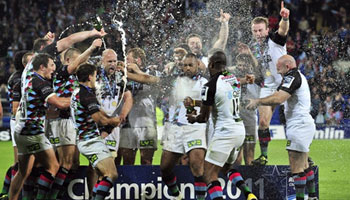 The Heineken Cup final wasn’t the only big game that took place in Cardiff on the weekend, as the Amlin Challenge Cup final produced a classic finish, with Harlequins snatching the silverware from counterparts Stade Francais.

Harlequins secured Heineken Cup qualification for next season with their come from behind 19-18 victory at Cardiff City Stadium. The Amlin Challenge Cup win ensures that seven English teams will take part in the next showpiece European tournament, which Leinster famously won on Saturday.

Despite having very little ball and Stade Francais controlling the game in the second half, Quins managed to manufacture a try with just 3 minutes left, brilliantly set up by the efforts of Nick Easter, Joe Marler, and Danny Care. Gonzalo Camacho gathered Cares kick ahead, leaving them a point behind before Nick Evans lined up his kick.

The former All Black, surely the obvious second choice as flyhalf for New Zealand this year, took the challenge head on, slotting the kick with aplomb. “All those times on the training pitch you dream of moments like that one. I was excited to have the kick – I wasn’t nervous. That is what we live for as kickers,” said Evans.

“Credit to the whole team. We never gave up, and I think we have shown that throughout the season. We got ourselves out of jail, got the win and got the silverware.

“Bloodgate was like a bomb going off in the club. Everything scattered and we had to start again, we had to rebuild. We had a lot of the same players but confidence had been knocked out of them. Everyone hated us and things like that, so it was hard.

“Hopefully now, we can push on and create a bit of a dynasty,” he added.

On the flip-side, James Haskell admitted that he might have been at fault for allowing Harlequins to slip through for that final try as he shot out the line.

“I’ve got a feeling in my gut I lost us the game. I won’t be sleeping well tonight.”

It was a fantastic ending to a final, and tense throughout. Most of the points were via the boot, so this highlights clip focuses on a few of the kicks, and includes the try in its entirety, the celebrations, and then an interview with Evans as part of the playlist. Also, much requested, keep a lookout for fullback Mike Brown enjoying the festivities with the fans after the game.