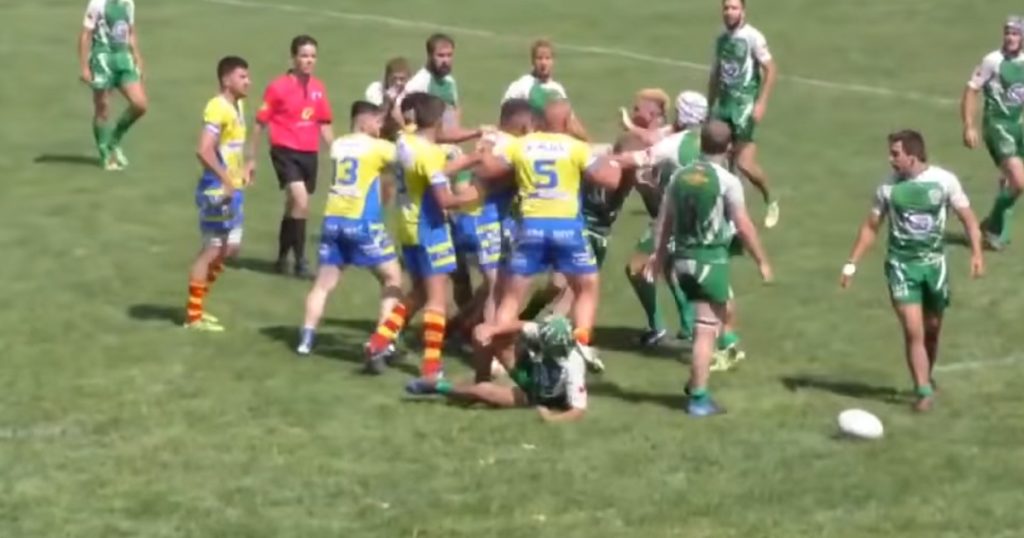 A player was hospitalised at the weekend following a horrible mass brawl between two French Reserve League sides Mougeurre and Elne in the South-Western region of Saint-Girons.

The shocking incident occurred during the final of the Excellence B championship, which is held for the reserve “B” sides. Mougeurre (in green) ran out convincing 23-7 victors.

Basque team Mouguerre were leading their Catalan opponents Elne entering the final minutes of the match before all hell broke loose.

What followed was a series of inexcusable punching and even kicking from some players, with the brawl eventually calming down after a good couple of minutes. The referee ultimately called a halt to the game with 76 minutes played.

Players, substitutes and even fans all got involved, with the referee seemingly left with no other option than to leave them to sort things out by themselves. Once things had thankfully calmed down though, an ambulance was sent onto the pitch to take the injured player off to hospital where he was treated.

Speaking to the local press, Sud Ouest, the Mouguerre coach Jérome Etcheverry said the actions of Elne had “spoiled our victory”. He also gave an update on the injured player.

“At the moment, he is in the St Girons hospital, he was vomiting, he couldn’t remember much and his parents are with him,” he said.

“They have spoiled our celebration, it’s not good what they have done and I don’t accept it. The trophy (Le Bouclier) was handed over to us in the changing rooms.”

Mouguerre club president Philippe Larrue echoed the thoughts of his coach: “I have a lot of regret for the end of this match. I’m thinking a lot about our winger who is still a junior and he will not be there to lift the trophy.”

No doubt there will be repercussions for Elne after this affair, which spoiled what had been a well-contested final.