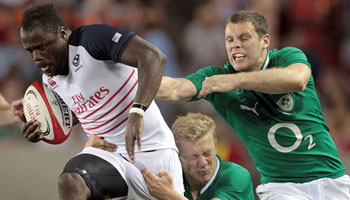 Ireland scraped home against the USA in Texas at the weekend, coming away with a narrow 15-12 victory in a hard-fought game watched by a record 20 181 rugby fans. Ian Madigan kicked all the points for an Irish side without those touring with the Lions.

For the USA Saracens back Chris Wyles kicked four penalties, but it was their second loss in succession, following on from the opening Pacific Nations Cup defeat to Canada a week prior.

“We’re trying to score tries,” said Eagles skipper Todd Clever. “That’s the only way we can make this game exciting and give the fans what they want and the players what they deserve.

Ireland captain Peter O’Mahony was ultimately pleased with the win, despite it being tough going.

“It is an away from home Test win and I am thrilled to bits for the boys who won their first caps that the rest of the boys got the win on such a special day,” he said.

“The overall thing is we got a win away from home, it was a tough game and we expected nothing less. The USA have really improved over the last 12 to 18 months, they have been really pushing on. It was tough out there, the conditions were tough and the ball was really slippy.”