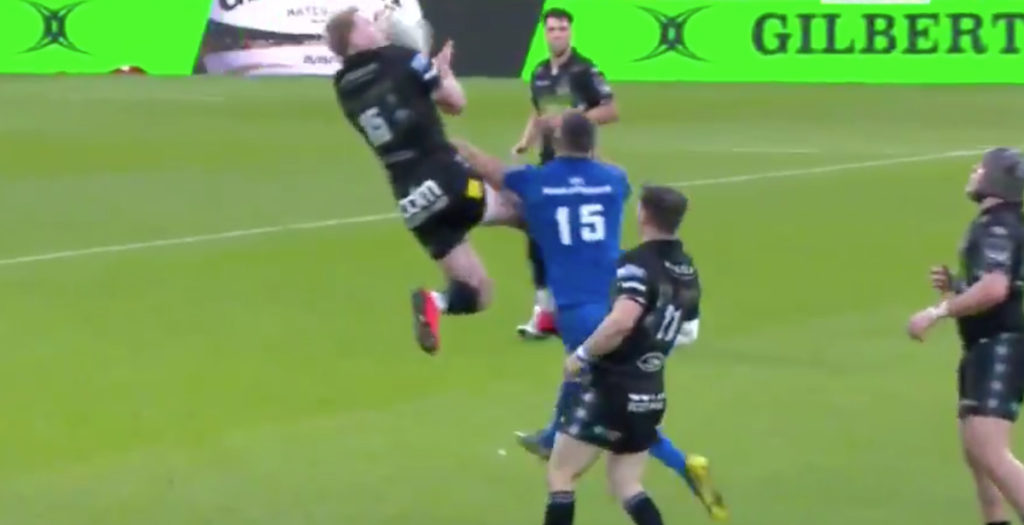 Ireland and Leinster full back Rob Kearney received a yellow card for a challenge in the the air on Glasgow’s Stuart Hogg during Saturday’s Pro 14 final.

The Scotland international’s head made contact with the ground as he landed but referee Nigel Owens said Hogg’s shoulder and neck made first contact with the turf, meaning a yellow card was sanctioned rather than a red.

The incident came in the 66th minute of the match and therefore a red card would have only kept Kearney off the pitch a further four minutes, but some Glasgow fans may have felt a sense of injustice at Celtic Park.

Rob Kearney receives a yellow card for this challenge on Stuart Hogg!

The game finished 15-18 to Leinster, meaning the Irish province defended their title to lift the Pro 14 trophy for the sixth time.

Here is some of the best reaction to the incident:

How’s this not a red card for Rob Kearney? Hogg lands on his head yet Nigel Owens only gives a yellow? https://t.co/CnZJoi7jqO

Rob Kearney is one of the greatest exponents of fielding the high ball in the modern game, but he got that all kinds of wrong and is blessed that Hogg’s landing wasn’t worse.

“I think it is a red card, and Leinster might have got away with one.”@lukefitz11 thinks referee Nigel Owens’ decision to show Rob Kearney a yellow rather than a red card might have been the decisive moment of tonight’s #GuinnessPRO14 final. pic.twitter.com/PvZtPz51lj

65 mins Rob Kearney of Leinster lucky not to be red carded for taking Stuart Hogg out in the air . A yellow card given to him by Nigel Owens was the wrong decision. Dreadful call by “the best ref in the world.”