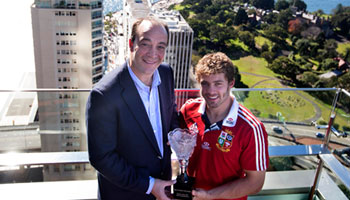 Leigh Halfpenny has been recognised as the HSBC Lions player of the Series after helping to guide The British & Irish Lions to their first Test Series win in 16 years.

Decided by an independent vote from members of the media representing Australia and Britain and Ireland, Halfpenny was nominated as the clear winner for the award from over forty votes following the historic win in Sydney’s Olympic stadium.

The fullback made his Lions debut during the Tour, starting all three Tests against The Wallabies and with the Series locked at 1-1, going into the final match in Sydney, Halfpenny continued his fine form on tour, helping to guide the tourists to victory, landing eight kicks in all.

Halfpenny kicked 21 points, a record for a Lion in a Test, taking his own personal points tally for the 2013 British & Irish Lions to 49 points throughout the Tour.

During the deciding game, which finished 41-16 to the Lions, Halfpenny also set up a crucial try for George North which took The Lions into a clear the lead towards the end of the second half.

On receiving the award Leigh Halfpenny said: “It’s tremendous to be honoured and to receive this award but it was a true squad performance out here for us throughout the Tour.

“It’s been a long Tour and to finish it off with a Series win is a fantastic feeling. I am delighted I have contributed in such a talented and exciting Lions squad.”

The award was presented to Halfpenny by Giles Morgan, Global Head of Sponsorship & Events for HSBC; the Principal Partner of the Tour.

Giles Morgan, added: “Congratulations to Leigh on being voted the player of the Series by all those in the media, thoroughly deserved recognition for an outstanding personal performance throughout the Tour.

“HSBC is delighted to have played a part in what has been a hugely successful Tour on and off the field for all those involved. It is particularly pleasing to end our second consecutive tour as Principal Partner of The British & Irish Lions with a Series win.”

The British & Irish Lions leave Australia on Tuesday 9th July, heading back to Britain and Ireland with the Tom Richards Trophy, the first time The Lions have beaten Australia since 1989.