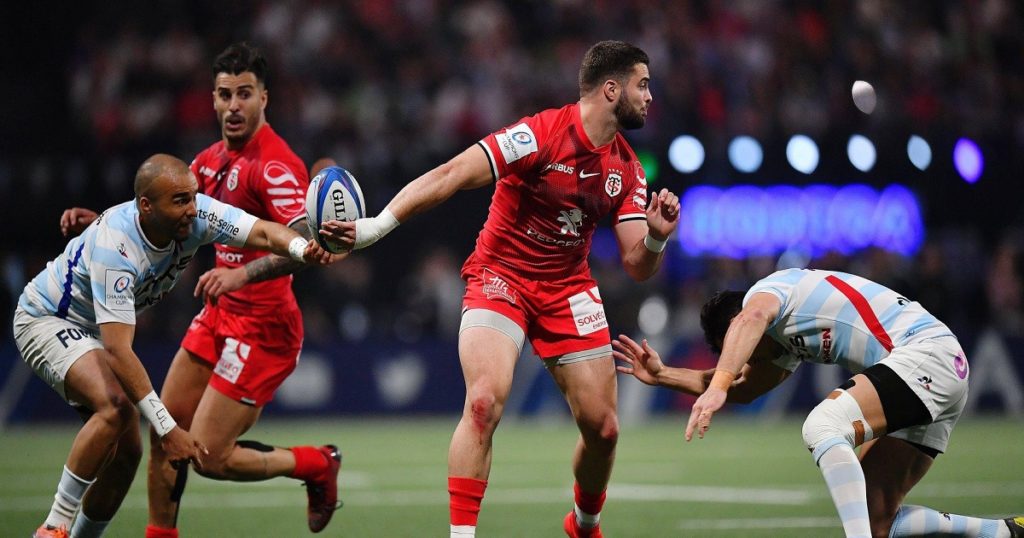 A staggering first half performance after losing fly-half Zack Holmes to an early red card was enough to take Ugo Mola’s Toulouse into their first European Champions Cup semi-final since 2011 after a 22-21 win over Racing 92. Antoine Dupont scored a brace but it was a sublime offload that set up arguably one of the greatest tries in the tournament’s history.

Winger Lucas Tauzin has been something of a revelation in the Rouge et Noirs this season, coming out of the France Under 20 set-up. The 20-year-old winger proved his ascension to the first XV with a number of impressive carries in the early stages against Racing.

Having just lost Holmes for the duration, Toulouse were awarded a degree of parity when Racing’s Teddy Thomas was sin-binned for a professional foul as the home side were forced into heavy defence near their own line.

From this, the visitors spread the ball wide, with Tauzin sending a lovely reverse pass out the back for centre Sofiane Guitoune, who then fed the ball back inside for Medard to crash over for a remarkable try.

This is rugby, but not as we know it 🤯

Arguably the try of the tournament 🙌 pic.twitter.com/lqvEmB7Zf6

Dupont added a third try before the break to give Toulouse a 19-10 advantage at half-time, which they then managed in the second period.

Racing 92 were perhaps their own worst enemies, with Juan Imhoff, the player Holmes tackled to receive his red card, himself getting sin-binned for a similar offence to Thomas.

The home side, who had led in the opening 40 minutes through Thomas’ try, scored again with minutes left on the clock, but Maxime Machenaud was unable to slot the conversion from the touchline and Toulouse managed, somehow, to hold on.