Nick Williams, who once demolished a Leinster flanker with this giant fend, has retired from rugby 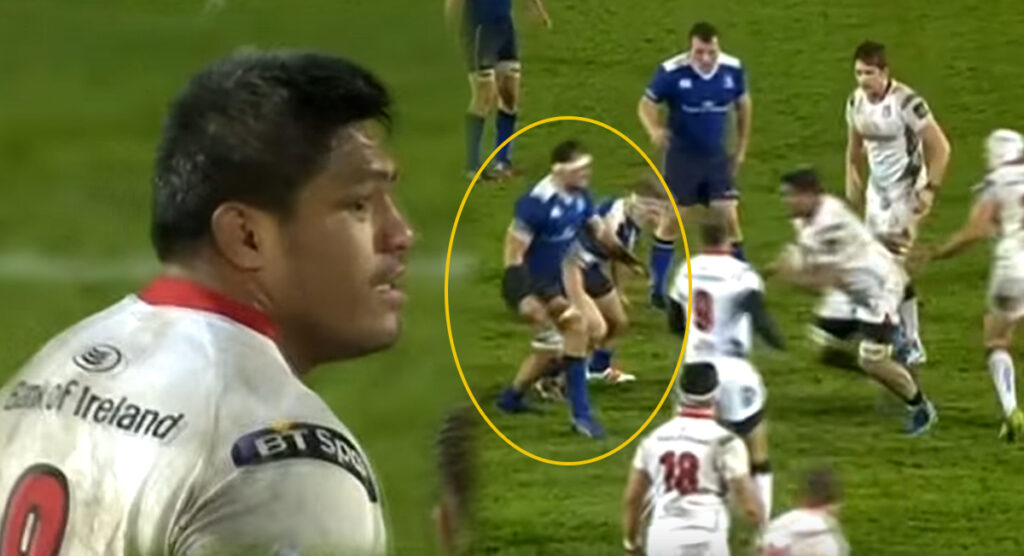 Immense number eight Nick Williams has called time on his 16-year professional career, Cardiff Blues have confirmed. He had hoped to bid farewell on the pitch but remains immensely grateful for every opportunity he has had to pull on the jersey.

Williams, who was born in Auckland but of Samoan descent, played rugby league through his youth and switched to union late. He was taken under the wing of Mark Anscombe and quickly progressed to North Harbour and Blues honours.

The now 36-year-old played 37 Super Rugby games for the Blues and earned four Junior All Blacks caps before making the move to Europe.

He spent two years at both Munster and Aironi, before reuniting with Anscombe at Ulster where he spent four successful seasons and was named PRO14 Player of the Year in 2013.

He later spent four seasons at the Arms Park, and is upset at not bidding farewell to the faithful on his own terms.

“It’s sad not to have had one last run out at the Arms Park but with Covid-19, and everything that has come with it, there have been much bigger things to worry about. It is what it is,” said Williams.

“I have been blessed to play this game for so long and could never have imagined I would be a professional for 16 years and travel to so many brilliant places around the world.

“When I arrived in Cardiff, I knew this would be my last club and I have tried to make the most out of every singled minute. It has been a really special time and the welcome my family received has been unbelievable.

“Winning the European Challenge Cup a couple of years ago is an obvious highlight but I will also just miss the day to day and being with the boys around the place.

“I am so grateful and have nothing but love for everyone at the Arms Park, from teammates and coaches, to the brilliant staff and sponsors, who have also been great to me, and of course the awesome fans. It has been a hell of a ride and I’m grateful to all the teams I have been part of.

“If I could carry on playing then I would but the game has taken its toll and my wife has already sacrificed so much. I’m now looking forward to the next chapter with my family.

“We are settled here now, this is our home and I’m looking forward to sharing a beer with some of the supporters on the terrace when we get back to the Arms Park.”

Five years ago, when Ulster were up against Leinster in Dublin, Williams put in a memorable fend, sending Ireland flanker Rhys Ruddock to the turf.

Ruddock was dominated in the collision twice, demonstrating the power of Williams, who was reminiscent of the late Sione Lauaki, who made a similar fend on Richie McCaw in 2007.

During Williams’ time with Cardiff Blues, he made 77 appearances, scored 13 tries and played an inspirational role in the 2018 European Challenge Cup success.

We wish him well on the next chapter of his journey.

Nick Williams, who once demolished a Leinster flanker with this giant fend, has retired from rugby | RugbyDump - Rugby News & Videos