Nigel Owens - Behind the Whistle 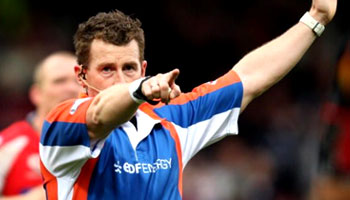 Referee Nigel Owens suddenly found himself in the spotlight once again last month, as fellow Welshman Gareth Thomas announced to the media that he is gay. Owens himself came out the closet a few years back, and his career has since flourished.

Owens has been through a lot in his life, including steroid use, bulimia, and attempted suicide. These days, he’s found happiness and is one of the top referees in world rugby.

While the stigma surrounding homosexuality in the sport still exists, for the most part Owens found that people have been supportive and have let him get on with doing his job.

“You do get the odd few who shout the odd things from the crowd – but most of that is still in good banter,” he said. “I have been lucky. Everybody from supporters to players to coaches to administrators have all been very supportive.

“There are obviously people who may feel uncomfortable with it but they are very few and far between and you’ve got to respect the way they think about people as well.”

While he was surprised at the support he received, he still feels it could have been a lot worse if he were a referee in another sporting code.

“I think it shows that, especially in Wales, how close a community rugby is. This is not against football (soccer) in any way because I like watching football.

“But I think when you think of spectators in football – if I was a football referee it would be more difficult to go and referee in football matches than it is in rugby matches.”

Straight faced on the field but with a great sense of humour off it, Nigel Owens has come a long way and will no doubt continue to command respect for the manner in which he controls a rugby match.

This interesting feature allows us to get to know Owens a bit better and see that while to many he’s still just ‘that gay ref’, he is in fact one of the more amusing characters of the modern game.

In a sport where we are traditionally critical of all referees, how does Owens weigh up in your opinion when compared to other international refs? And who do you think are the top 3 currently?