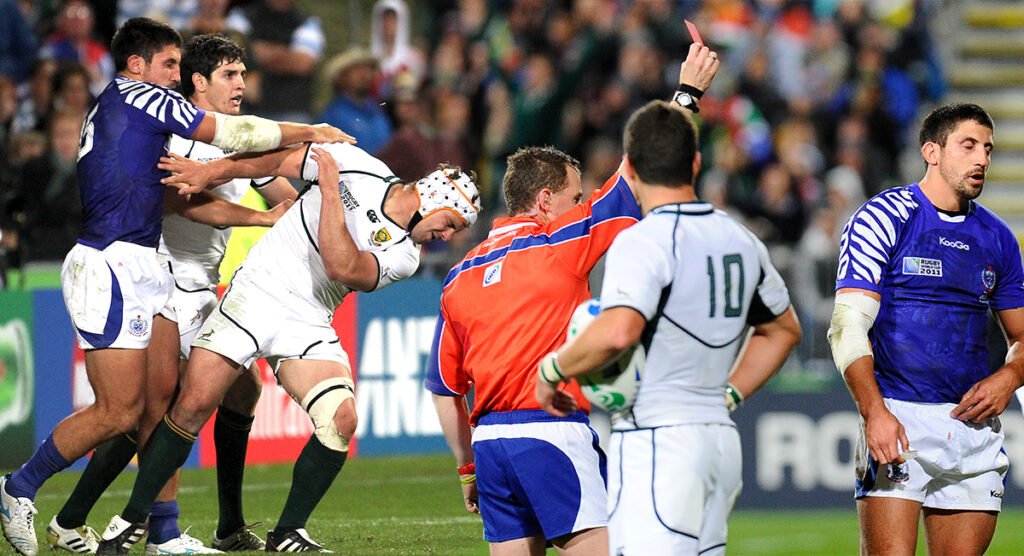 Referee Nigel Owens has spoken about the controversial 2011 incident that saw him show a red card following a lashing out after some holding on at the breakdown. At the time, fans felt that the decision was not only harsh but also controversial as there was an apparent conflict of interests.

In an extremely physical and tense 2011 Rugby World Cup clash between the Springboks and Samoa, Samoan fullback Paul Williams was sent from the field after he lashed out at flanker Heinrich Brussow.

Brussow had reacted, with strikes to Williams’ arms, as the Samoan fullback was holding on to him, preventing him from following play. So as Williams got up, he struck Brussow in the face with what most would say was a flat hand.

The touch judge was called into action and after a consultation, Welsh referee Owens gave Williams his marching orders. There was somewhat of a backlash after the game.

He has now spoken about the incident in an interview with Supersport’s Matthew Pearce.

You can watch the full incident again below. What did you think of the decision? Let us know in the comments below!

England midfielder Joe Marchant has celebrated his 24th birthday back in training with Harlequins following his recent loan stint at the Super Rugby Blues.

Despite weeks of training in Limerick, RG Snyman and co have yet to meet up with the whole Munster squad

Munster have their new signings training in Limerick, including Springbok RG Snyman, but pandemic safety measures mean they have yet to meet the full squad.