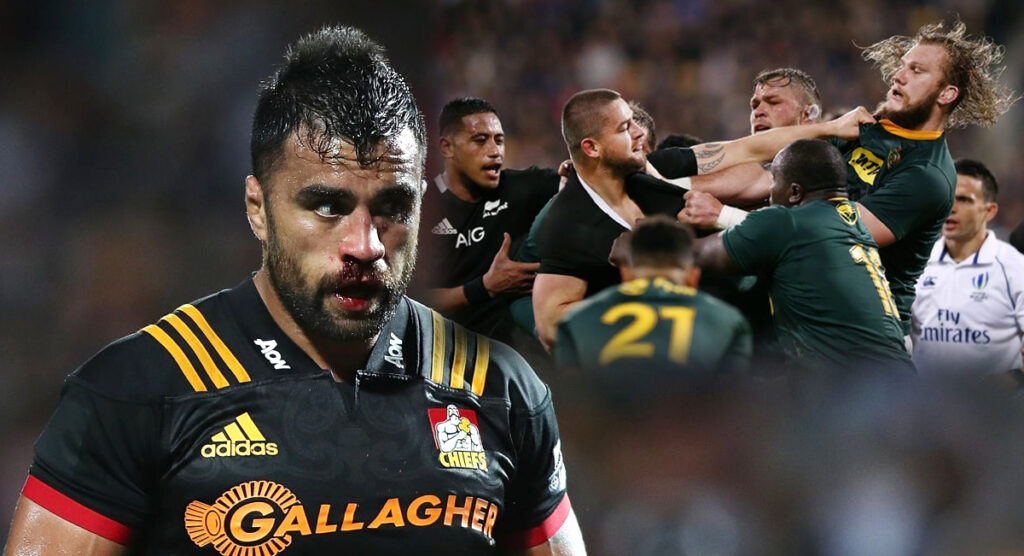 In an exclusive column for new long-form rugby website The XV, former All Black Liam Messam has spoken about the hardest men he’s played rugby against, and what makes them tick. Unsurprisingly, a South African is at the top of his list.

Messam certainly had a hard man reputation himself, finding himself on the wrong side of the law on a few occasions, but he has spoken about two South Africans as being right up there with the toughest men he’s played against.

While some may think Bakkies Botha would get a mention, he and another legend of the game are adamant who gets the honour.

“I have taken my fair share of knocks on the field. You don’t get through almost two decades of professional rugby without copping a cheap shot here and there and, to be fair, dishing out the odd one yourself,” says Messam for The XV.

“Dan Carter said that South African loosie Schalk Burger was the toughest player he’s ever faced on the rugby field and it’s hard to argue with that. That guy has zero fear and zero care for his body – he would just fly into things. When I’m on the park, I always want to test myself against the biggest and the strongest guys and although there might be some monsters playing in the loosies now, no one could hit you harder than Schalk Burger.

“I think in many ways he was sort of like the spiritual and emotional leader for the Springboks. He may not have made all the calls on the field, but he led those boys into battle. You could see when he put in a huge hit or made a crazy run that it would lift the whole team – and he was able to do that pretty often.”

WATCH: Corey Flynn and Liam Messam tussle sorts itself out

Messam says that there are other players who were more physically tough but perhaps didn’t have the mental side of their game.

“Burger didn’t have that problem – that man is a freak in all the right ways. DC [Dan Carter] said he felt like he had a target on his back whenever he played against Burger but I can tell you that Burger wasn’t afraid of causing some collateral damage and if you saw his name on the team sheet before a game, you knew you were going to be hurting the next day.”

He says that aside from his menacing reputation on the field, Burger was a true gentleman off it.

“Honestly though, he’s the nicest bloke off the field. I remember one match we were playing against the Springboks, I hit him high near the end of the game and South Africa kicked a penalty to steal the win. I was pretty dark after the final whistle but he was the first one that came up to me and told me not to dwell on it – it’s rugby and sometimes stuff like that happens.

“I felt like a right prick at the time because I’d lost us the Test match but he gave me a few words of encouragement to keep my chin up.

“The South Africans though, I don’t know what it is but there’s something about them. They’re all great guys off the pitch but when you’re on the field, they want to hurt you.

“A few years ago, RG Snyman managed to break my nose and finger at the same time. We’d had a bit of a scuffle off the ball and a few phases later I was lining up for a carry. He was a few men inside me so I could only really see him out of the corner of my eye but he saw me and just bee-lined straight towards me.

I was like, ‘Nah, surely not – he’s not going to go that far out of his way to hit me?’. But he absolutely did – he came on the angle at me, and I tried to put a shoulder on him but it didn’t stop him at all. He absolutely smashed me, busted my nose and my finger. Moments like that stick with you and I’ll always have one eye on him whenever we play.

Messam continues to talk about other players, particularly closer to home in New Zealand.

“But even the tough buggers are good blokes off the field – you can always have a laugh after a game. I’ve been around long enough now to know that all the players are really good, genuine people. What happens on the field, stays on the field and I’ve only had good encounters off the field, so I know it’s just a part of being a competitive professional.”

Read the full article on The XV.Rugby. Register now for a free trial and get access to long form and thoughtful editorial content from award-winning journalists and content creators