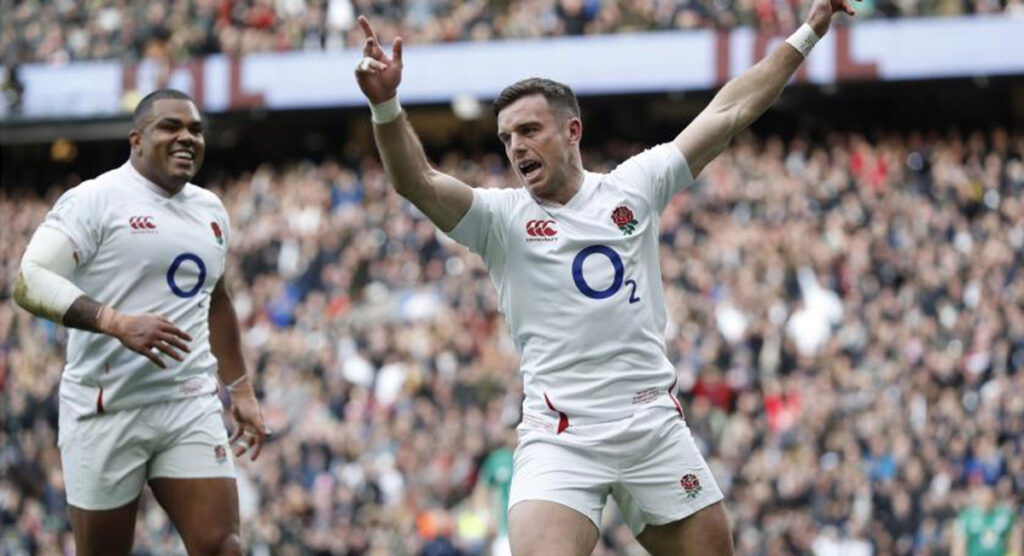 England thoroughly handled Ireland in an impressive 24-12 victory at Twickenham on Sunday. The hosts were up 17-0 at halftime and never looked in any danger throughout the afternoon, thereby ending any remaining Irish Grand Slam ambitions.

One of the more amusing moments in the match came off the back of a George Ford try that was assisted by a very costly mistake from the otherwise indomitable Johnny Sexton. The Ireland captain fumbled the ball in the in-goal area and Ford was there for the score.

It was at this point that the England fly-half did what so many do after scoring a try, he booted the ball into the stands. This time, however, you probably weren’t alone in wondering where the rather low and hot trajectory had sent the ball. And if maybe it hadn’t even hit someone.

Another camera angle provided the answer. Unfortunately for a spectator in the front row, he took the ball straight into the face.

George ford with one of the most impressive kicks I’ve seen in a while… 🎯 #SixNations #ENGvIRE pic.twitter.com/6jmHK08dd7

As for the match, England head coach Eddie Jones was pleased, saying: “If it was a cricket match we would have declared at halftime… They were outstanding in that first 40 minutes. We put Ireland to the sword.”

For his part, Ireland head coach Andy Farrell took responsibility for his side’s loss: “I think it was a knock-on effect of cumulative errors. The opposition had something to do with it obviously, they played really well.

“They played like a side that was desperate to stay in the competition, so fair play to England for that. But we’ll look at ourselves for the reasons we allowed them to play the game they wanted to play. First and foremost, I look at myself. Why were England up for it, winning the physical edge? That’s down to myself.”

Sexton’s fumble and Ford’s subsequent try are in the first few moments of the full match highlights below: