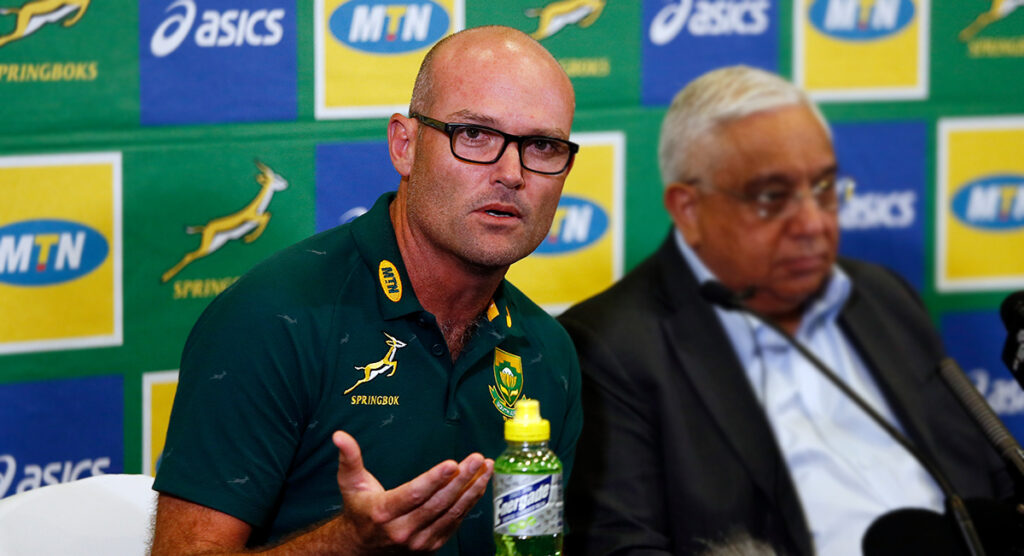 New Springboks coach Jacques Nienaber has indicated they are doubtful starters for this year’s Rugby Championship, casting a cloud over the SANZAAR tournament.

Nienaber, who replaced Rassie Erasmus after last year’s World Cup triumph in Japan, fears his players won’t be physically ready for the four-nations event which is provisionally scheduled to be played entirely in New Zealand from November 7 to December 12.

World Rugby confirmed its backing for the new “emergency” international window, pushed back three months because of COVID-19.

However, Nienaber noted the vast discrepancy in readiness for his players compared to those in Australasia.

While Wallabies and All Blacks players will have had a steady diet of Super Rugby matches to have their players in shape, their Springboks and Argentina counterparts have been starved of high-level competition.

The impact of the pandemic in both South Africa and Argentina has left both nations unable to begin domestic competitions.

Nienaber wants the South African Currie Cup to have begun by the end of August or would be reluctant to risk the welfare of Springboks on the Test stage.

“We have a responsibility to ensure that the players have received sufficient conditioning so that they can play rugby,” he told Rapport newspaper.

“If we can’t play six games, then I don’t think we will go. The player well-being risk would just be too great.”

Nienaber wants to take a large 45-man squad to New Zealand given the quarantine requirements if additional players need to be flown in later.

NZ Rugby chief executive Mark Robinson has said he would investigate the possibility of players from South Africa and Argentina arriving several weeks out from the Rugby Championship and playing warm-up matches on Kiwi soil.

Nienaber said the commitment of his players to spend at least two months away from family in coronavirus-hit South Africa would be a difficult call for each of them to make.

“You can only imagine the predicament facing guys if a close relative, for example, is suddenly badly affected by the virus back home. Can you fly back? Do you fly back?

“What happens if you then hope to return to the tournament, meaning fresh quarantining requirements?”