Seilala Mapusua talks about the pride of playing for Samoa 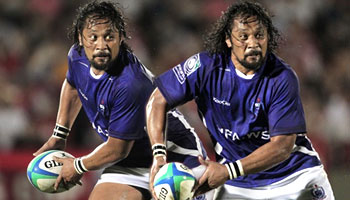 Samoa have always been a proud rugby nation who over time have produced some incredible players. As the World Cup approaches, former London Irish centre Seilala Mapusua talks about the pride felt when representing their country.

A few weeks back we watched on in awe of Samoa as they pulled off a brilliant upset win over the Wallabies , in Australia. While their performances at the Pacific Nations Cup shortly before that had been a bit puzzling, the Wallaby win showed how strong they can be when they get all their top players together, from all the different corners of the globe.

Unfortunately one of the downfalls of professional rugby these days is that to make a decent living out of the game, their top players ply their trade elsewhere, predominantly in the UK and France. That’s both a good and a bad thing, for obvious reasons.

Overall though, the experience, skills, and confidence they build when playing in some of the top leagues in the world means that as a unit, when timing and resources are right, they are capable of overturning even the best sides. And if they don’t beat you on the scorecard, you’ll feel beaten the next day anyway, as the physical element the pacific islanders bring to the game is fearsome.

All the talk ahead of the World Cup now though is about Samoa’s meetings with Wales, and of course defending champions South Africa, who themselves aren’t shy to mix it up physically. In 2007 Bryan Habana scored four tries against Samoa , but there were without a doubt a few bruised Boks following the match. This year will be no different, as the pride of the people drives the players to give their all out on the pitch.

“We’ve always believed as a team that Manu Samoa belongs to the Samoan people, so we’re always playing for our people every time we pull on that blue jersey,” said Mapusua, referring to their tiny population of just 180 000.

Seilala is ready, and if you’re not in the mood for the World Cup yet, you should be. We’ll continue to bring you preview videos, interviews, and all sorts of little bits of footage and info over the next few weeks as we lead up to the highly anticipated tournament.

Do you think a Samoa have a genuine chance of upsetting Wales and/or South Africa?