Should Peter O'Mahony's challenge on Stuart Hogg have gone unpunished? 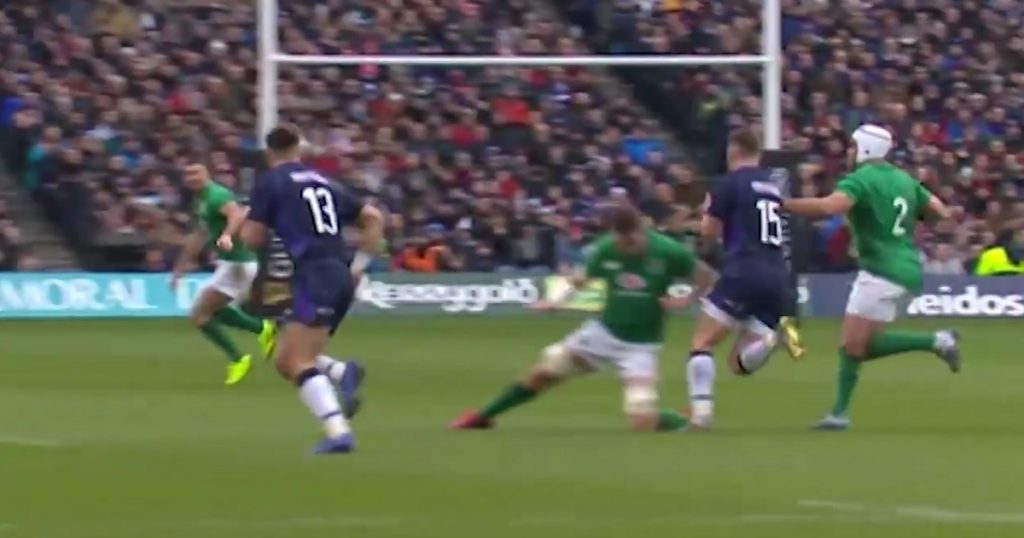 As Ireland recorded their first victory of this year’s 6 Nations campaign away to Scotland this weekend, Peter O’Mahony may well be counting his lucky stars after an alleged late challenge on Scotland full-back Stuart Hogg.

Hogg injured his shoulder in the incident and was forced off shortly afterwards, denting the home side’s chances of competing in a bruising encounter.

The pain was doubly hard on the Scots as they gifted Conor Murray an easy try after a defensive mix-up between Tommy Seymour and Sean Maitland. Ireland eventually came out on top 22-13 to keep their championship hopes alive.

O’Mahony was busy defending the outside channel when Hogg began his counter-attack. Hogg then chipped over the top, with O’Mahony not moving out of the way in time.

A sensational first-half at Murrayfield, where Ireland lead 12-10 at the break.

But should Scotland have had a penalty for the injury that caused Stuart Hogg to be taken off injured?

The incident was not reviewed by the TMO, but it was a topic of debate with the BBC Sport team at half-time, with pundit and former Scotland captain believing that it was “late” but that he “wasn’t sure it was a penalty, but that was where his injury came in.”

Scotland head coach Gregor Townsend refused to be drawn into a debate as to whether O’Mahony should have been penalised, but instead bemoaned the loss of his star player Hogg.

“It’s disappointing, he chipped ahead and he was sandwiched between two players…there was a collision there that forced him to fly over and land on the point of his shoulder. It was a big moment in the game because we conceded the try a minute after that,” Townsend said.

“When the referee goes back [to the TMO] it tends to be if a try has been scored straight away or if the TMO is watching the incident in slow motion, it’s hard to keep an eye on it all the time because the game is so quick.”

O’Mahony did appear to be on his way down anyway, but whether the back-rower could have made more of an effort to stay out of Hogg’s way remains unclear. In any case, it is unlikely that this incident would have had much bearing on the game, with Ireland a vastly different side to the one which was defeated by England in Dublin last weekend.

That challenge from Peter O’Mahony on Hogg was very naughty. He knew exactly what he was doing and should have been penalised #SCOvIRE #6Nations2019 pic.twitter.com/t7IrRI1301

Ireland themselves lost talisman Jonny Sexton in the opening half as well, after being put firmy through the ringer by the Scottish defence. Claims that Sexton was targeted again perhaps had some grounding, due to the out-half being put to deck by the likes of Jamie Ritchie, Ryan Wilson and Stuart McInally.

But claims Joe Schmidt appeared to accuse a Scottish player of stamping on Sexton’s head – prior to the Leinster man failing an HIA test – were quickly debunked by the coach himself.

“[Jonny] copped a stamp, but I don’t think it was a Scottish player. I think it was actually one of our guys who tripped up over him at the ruck,” Schmidt said afterwards.