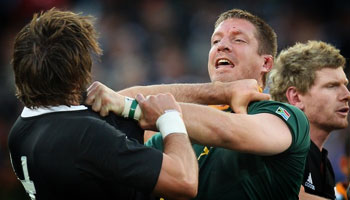 South Africa’s Morne Steyn kicked South Africa to a 18-5 victory against New Zealand at Port Elizabeth’s Nelson Mandela Bay Stadium on Saturday afternoon, giving a passionate capacity crowd something to cheer about ahead of the RWC.

With much speculation about his future as first choice flyhalf, kicking ace Steyn showed his value in a tight contest as he slotted three long range penalties in the first half, and continued to punish the All Blacks for their forced indiscretions throughout the match.

While the visitors were without key men Richie McCaw and Daniel Carter, this was a good run out for some of the players who will be invaluable come world cup time, and a great test for flyhalf Colin Slade, who has heaps of pressure on him to perform as understudy to the king.

The intensity was something to behold, and while there were a few leaks in the Springbok defence, they scrambled well and managed to hold out the multi-talented All Black backs. Jaque Fourie in particular was superb, as was Heinrich Brussouw who, despite taking a nasty knock in the face early on, went on to earn the Man of the Match award.

The Springboks, who stuck to the same tactics that coach Peter De Villiers insists is what they’re best at, managed to out-muscle the All Blacks, and take the points on offer. They’ll get a great boost from it as it was their final Test before the RWC, while the All Blacks still need to travel to Suncorp Stadium in Brisbane for the Tri Nations decider next weekend.

The highlights below show the points, in a match that only had one try. There were some impatient requests on here though, so this video will have to do for those who missed it live.