Steffon and the Brothers Armitage 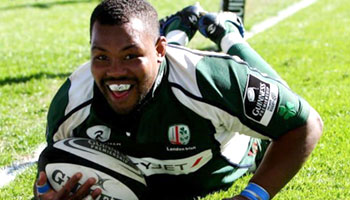 London Irish host Leicester at the Madjeski Stadium today as we get back into the Guinness Premiership while the Heineken Cup takes a break for a month or so. Flanker Steffon Armitage will be making his return.

Armitage, who plays at London Irish alongside his brother Delon, will be hoping to catch the eye of the England selectors ahead of the Autumn internationals. We’ve got this short feature to help you get to know the player, and the family a little better.

Steffon and Delon are the ninth pair of brothers to have played for England. Theyve come a long way to get there though, with quite an interesting background as they came from Trinidad & Tobago, by way of Nice in the South of France.

They both joined the Racing Club of Nice, but Delon was rejected by the France U16s as they felt he was too tall and skinny. That blow meant he walked away from rugby for a year, taking up football while Steffon joined Grasse Olympique RFC.

Their father, John, now a South Devon-based tour operator, says that he felt Delon would be lost to rugby, but a phone call from England changed his life.

“He used to play mini-rugby for Richmond. Mike Hallasey from the club rang, inviting Delon to join them on an Under-17s tour of Australia.

“Delon went and never looked back. When we moved back to England, he was picked up by London Irish while Steffon went to Saracens.

“Eventually, both boys were at Irish and we were soon resigned to eight-hour round-trips to watch them play at Reading’s Madejski Stadium.”

Its a great achievement for the family with such a diverse background.

“In my career I have played everywhere, partly because of people saying I was the wrong shape for one position or another. I started at scrum-half, then I went to centre, then full-back. I even played on the wing, says versatile Steffon.

“I ended up openside because I wanted to get my hands on the ball, which was not happening at full-back. Anyway, Delon’s full-back.”

Do you think Steffon will ever become a regular Test player, or are their better, bigger players available for England to call upon?