The All Blacks give South Africa a hiding in Wellington 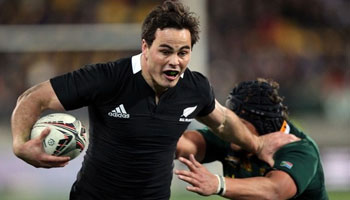 South Africa suffered their second heavy Tri Nations defeat in as many weeks as they went down 40-7 to a far stronger and more clinical All Blacks side in Wellington on Saturday.

The All Blacks sported their new retro looking jersey, bringing back the famous white collar that’s been missing for over ten years. It’s a throwback to the 1987 Rugby World Cup success, the last time they won the tournament. With the 2011 version starting in a few months time, they’re looking in good shape to replicate that success.

They were far more clinical than against Fiji, with Dan Carter commanding the ship. He missed a few kicks uncharacteristically, but looked back to his best, reinforcing the common perception that he’s the best rugby player on the planet currently.

South Africa on the other hand picked up their game slightly, but still looked out of sorts with the new caps and inexperience showing. The 21 or so first line players sitting at home are sorely missed, and will no doubt make a big difference to the side when they rejoin.

Coach Peter De Villiers has said that the main focus is the World Cup, shifting the weight of expectation and the favourites tag onto the home side.

“Pretty much the Tri-Nations has gone for us. We’ll move our focus to preparing for the World Cup. The All Blacks are more ready now for the World Cup and they deserve the tag of favourites to win it,” he said.

They will head home and prepare for their meeting with the Wallabies in Durban in two weeks time, while the All Blacks will face them next weekend. The form of some of their players will give them great confidence, with wingers Zac Guildford and Cory Jane in particular scoring great tries.

“When I got through I backed myself that I was going to get into that corner and was happy to get there. I guess I went back to the old CJ of using the ball and I ran with it,” he said.

“There’s a lot of guys trying to go into that wing spot so it is important that every time I get an opportunity on my wing that we do nail it,” he said.