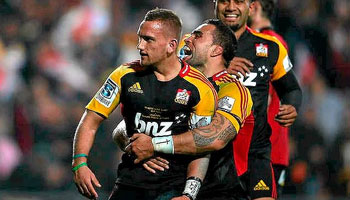 The Chiefs will defend their Super Rugby title against the Brumbies in Hamilton after they beat the Crusaders 20-19 in a semi final thriller on Saturday night. They scored 17 points in the second half to turn around a 9-3 deficit at the break.

From start to finish it was a typically fast paced New Zealand derby as the Chiefs started with a flurry, running the ball from all parts. The Crusaders defence held out though and with Dan Carter on song with the boot, it was the visitors who went into halftime with the lead.

It took ‘Flash’ Lelia Masaga to break things open, as he took the ball without many options, so turned on the gas and went straight through the middle. Flyhalf Aaron Cruden then picked up an intercept try a few minutes later and suddenly the Chiefs looked comfortable at 20-9.

In typical Crusaders fashion they bounced back from the restart as Israel Dagg showed why he’s the best attacking fullback in rugby, skinning two Chiefs players to score in the corner and keep the seven times champions in the game.

Despite late pressure, the Chiefs held on to claim a well deserved victory and book their spot in a home final, where they will host the Brumbies, who beat the Bulls in Pretoria last night.

“A lot of grit,” said Connacht bound Chiefs captain Craig Clarke when asked about the win.

“A lot of defence that epitomized how deep we can dig. We made it a little bit hard for ourselves with our set-piece. We had to simplify things and maybe just win a bit of ball at the front with big Brodie (Retallick), and we did that a little bit.

“We managed to hold a bit of possession, but I must mention the way they came back into the game. We were up by 11, and that’s a credit to how good they are that we had to dig so deep.”

Dejected Crusaders skipper Kieran Read said that they possibly didn’t get the bounce of the ball.

“There’s moments in these games that turn them and they certainly got those bounces of the ball,” he said. “We’re gutted. It’s disappointing but you’ve got to give it to the Chiefs. It’s their moment and they’re doing it well.”

Extended highlights are below. We’ll replace them with a shorter clip as soon as possible