The History of Rugby - Part 2 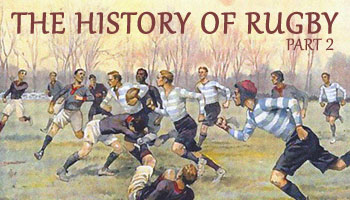 Today we continue on with the History of Rugby series as Part 2 brings more insight into how the game as we know it was formed and the events that took place along the way. From a twenty a side game as the first international, the a murderous pigs bladder, its well worth the watch.

As rugby developed from football, it started out as more of a kicking game. It soon became apparent though that passing through the hands was the way to go, so the ball became more streamlined and developed from a pigs bladder encased in leather to a rubber inside.

Off the field, the laws and regulations around the game were always up for discussion, resulting in the breakaway Northern Union becoming Rugby League.

Over time, the running game developed, and positions soon became more important and specialist forwards and backs came about.

As it spread around the world, the southern hemisphere became a powerhouse as New Zealand and South Africa took to the sport as a religion. It remains the same to this day. Politics and policies soon changed things though, as we’ll see in the next part.

Its a fascinating documentary and youll hopefully learn something new by watching. The other parts will be posted soon. Enjoy and have a great rest of the weekend.