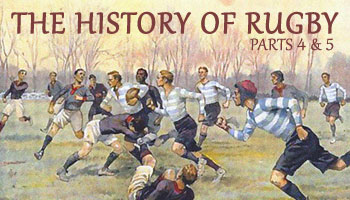 While the first few parts of the History of Rugby series were focussing on how the sport came to be, and the development of it thereafter, today youll see that the footage now goes through the decades and features Test series from 1920 to the late 1950s.

Its fascinating viewing as you get a chance to watch select highlights from the biggest matches each side of the second world war.

Youll get to see moments such as Wales beating England at Twickenham in 1933, and South Africa touring and beating New Zealand in a series in that same year, in what was a tour that at the time, defined the best team in the world.

Wales beat the touring All Blacks in 1935 in a classic Test , before the British Lions head down to South Africa in 1938, losing the first two tests but winning the third.

If you ever wondered how old the tradition of selecting an uncapped player for Barbarians matches is, youll find out as we see footage from the 1948 game against the touring Wallabies.

Wales were impressive in the fifties, winning the Five Nations, then the Grand Slam, and then beating the All Blacks at Cardiff Arms Park in 1954. It was the only loss of the All Blacks tour though, as they beat all other challengers.

France later became the first side to win a Test series in South Africa in that century, as they did so before following up with a Five Nations win the next year. Ireland dampened the occasion slightly though, with a great victory against the champions.

Its absorbing to watch and for the rugby purist out there, well worth getting into. Today Ive chosen to post two parts together, which will hopefully make it more worthwhile. Enjoy.