The Wallabies take the Tri Nations in thriller at Suncorp Stadium 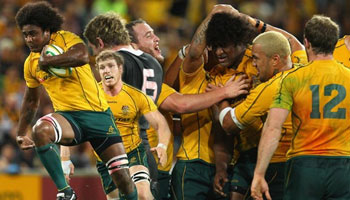 The Wallabies returned to the scene of the Reds’ famous Super Rugby win as they beat the All Blacks 25-20 in Brisbane, capturing the Tri Nations title for the first time in ten years. Here’s some quick highlights for now.

Australia outplayed the All Blacks in what was a frenetic first half at Suncorp Stadium, with the hosts smashing the Kiwis back, preventing them from getting front foot ball. In fact the name Dan Carter was barely mentioned in the first period.

A try by Will Genia and a brilliant solo effort by Radike Samo, as well as some good kicking by Quade Cooper, had the Wallabies heading into half time with a 20-3 lead.

The All Blacks came out a different side in the second half though, grinding their way back to bring scores level at 20-20 as they took control of the match and looked destined to take a famous comeback win. Kurtley Beale shut them out though with a fantastic try, sealing things, and capturing the Tri Nations trophy, their first in a decade.

“It’s obviously a significant result for us as we haven’t done that since 2001, that’s a biggie,” said coach Robbie Deans.

“In terms of the World Cup it’s irrelevant. If anything we’ve probably just put the bar up. But we’ll take some real value out of it. The All Blacks got back on top and looked ominous but these blokes kept their nerve, got their hands on

the ball and produced enough pressure to get the result, that’s an important step for us.”