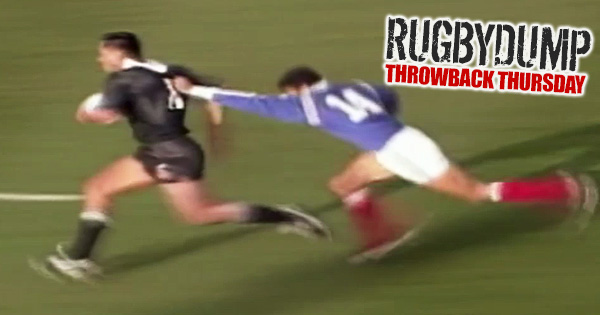 Today’s Throwback Thursday features a very young Jonah Lomu on the day he played his first ever Test match. It was the first Test against France in 1994, and Lomu became the youngest ever All Black at 19 years and 45 days, a record that still stands to this day.

The great man, who tragically passed away earlier this week, went on to play 67 times for his country, before his career was cut short due to the illness he suffered from since late 1995.

The All Blacks lost this Test 22-8, and Lomu wasn’t on his best form in the second Test either, which they also lost, 23-20. He was up against great French winger Emile Ntamack and despite getting the better of him with this run, was shown up due to his inexperience.

While he didn’t have a great debut, there were occasional flashes of brilliance, like this run early in the second half, where he got to stretch his legs and beat some tackles down the left wing.

By the time the 1995 Rugby World Cup came around, Lomu had just two caps to his name but was included in the squad, and the rest is history. His exploits will live on forever. May he rest in peace.

#ThrowbackThursday to Jonah Lomu showing glimpses of what was to come, as a 19 year old on debut for the All Blacks in 1994. Legend! #tbt #allblacks #jonah #jonahlomu #ripjonah