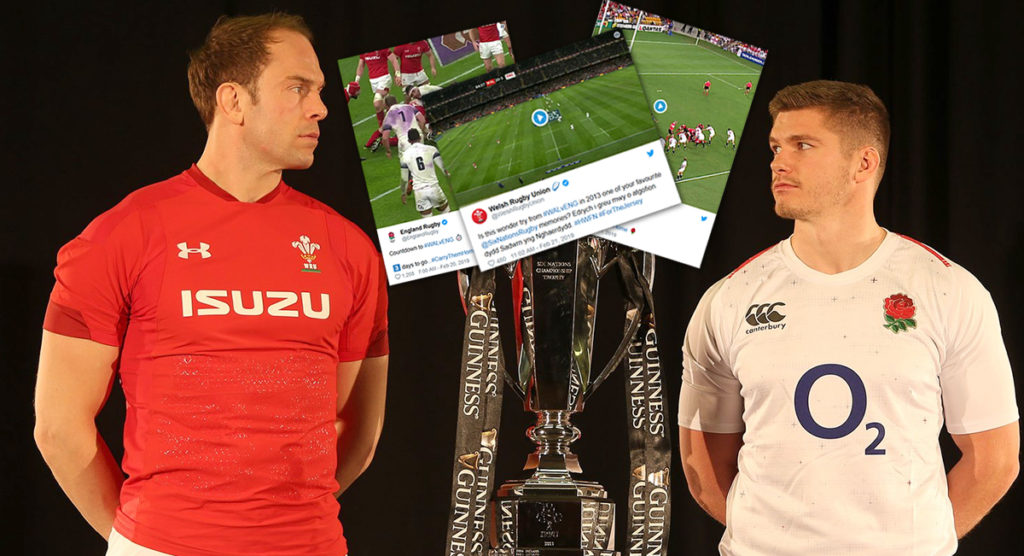 In the build-up to the Six Nations clash between Wales and England this Saturday in Cardiff, England have been quite active on social media, peppering their account with tries scored against the Welsh over the years.

Both teams are undefeated in this year’s championship, and the winner on Saturday will surely be the favourite to win the competition this year, and even the Grand Slam. Therefore, mind games will play a crucial part, particularly with Warren Gatland and Eddie Jones at the helm of both teams.

However, each team will do everything they can to build momentum, and England have taken to Twitter to rally support.

In the countdown to the match, England first posted the late Elliot Daly try at the Principality Stadium two years ago. In a tight affair, the Welsh held a slender lead until Jonathan Davies’ kick failed to find touch and was punished by England.

They then followed by posting clips of the Jonny May’s tries in last year’s game at Twickenham, in which England narrowly won again.

England continued the following day, posting Will Greenwood’s try in the 2003 Rugby World Cup quarter-final. Greenwood was on the end of a brilliant run from Jason Robinson in what was another pulsating match between the two nations.

The Welsh finally responded with a try of their own, posting Alex Cuthbert’s finish in the 2013 mauling of England at the Principality Stadium. It was a legendary try started deep in the Welsh half and involved a number of their players as they tore England apart and won the Six Nations that year.

As the match grows closer, this warfare between the two countries will only intensify until it reaches fever pitch. This is a match that rarely disappoints, and Saturday promises to be another enthralling affair again, with both teams knowing what is at stake if they lose.