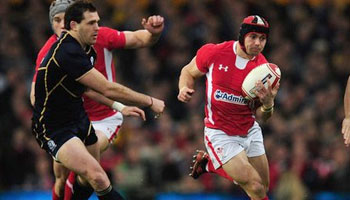 Wales beat Scotland 28-18 at Murrayfield on Saturday in what could possibly be described as a game for the purists. The victory keeps Wales’ hopes alive of achieving a Six Nations title, with the decider to be played in Cardiff next week.

The 2012 winners have bounced back well after losing their opening game against Ireland, and now have to beat England by just eight points next weekend to retain their title.

Hooker Richard Hibbard scored the only try of the game while fullback Leigh Halfpenny kicked the conversion and seven penalties for Wales.

Defense coach Shaun Edwards has said that while his team has a lot of experience to call upon, unbeaten England will ultimately be favourites to claim the Grand Slam at the Millennium Stadium.

“We have played in a World Cup semi-final and I am really hoping that that experience will really help us come Saturday,” said Edwards, who says that England took a lot from their victory over the All Blacks late last year.

“They are well aware there is a lot of expectation and a lot of pressure on them. England haven’t had a Grand Slam for ten years, which is a long time, but we are concentrating on ourselves.

“I really hope that experience of being in big games before will help us.”