Wallabies bounce back with a strong performance against South Africa 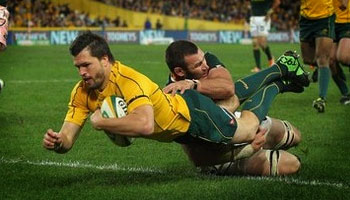 The Wallabies bounced back from the disappointment of a loss to Samoa by picking a far stronger outfit, resulting in a convincing 39-20 Tri Nations opener win over the touring Springboks in Sydney.

The Australians scored five tries as they out-muscled and outstripped the disorganised South African team, who at times showed major flaws on defence, and lack of power up front. David Pocock was influential, while the Reds halfback combination of Quade Cooper and Will Genia did what they’ve been doing all season, as they took their opportunities and played attacking rugby.

“I’m very lucky as a nine that the pack was going forward,” said Genia afterwards, paying tribute to the hard work and great platform set by a physically dominant forward pack.

In Rugby World Cup year, this Tri Nations tournament – which ends just a few weeks before the showpiece event starts – is going to throw up a mixed bag of performances, selections, and the inevitable injury concerns.

While South Africa have gone into the tournament with many players unavailable, this match was seen as an opportunity to blood young talent, and allow others to find their form.

“The game was disappointing. We expected more and things could have got even uglier out there. If we had taken our chances it would have been easier but we didnt. They certainly turned their week around in terms of the breakdown and physicality. They were hurt in that area last week but they turned up today,” said captain John Smit.

With more than 20 players injured or being rested, this touring Springbok side next have the mammoth task of taking on the All Blacks in New Zealand, a week from today.

The Wallabies will play the All Blacks in two weeks time, so will enjoy the break.

“The good thing now is we get some time to re-gather, recover, tend to a bit of detail and really hone in on the opportunity weve got at Eden Park,” said coach Robbie Deans

“Its going to go up another notch. Were looking forward to that.”

Below are some highlights from the match, which will be replaced with a better quality video when possible. For now, you can catch up on what happened if you missed the game.