WATCH: England lose to All Blacks after tight offside call 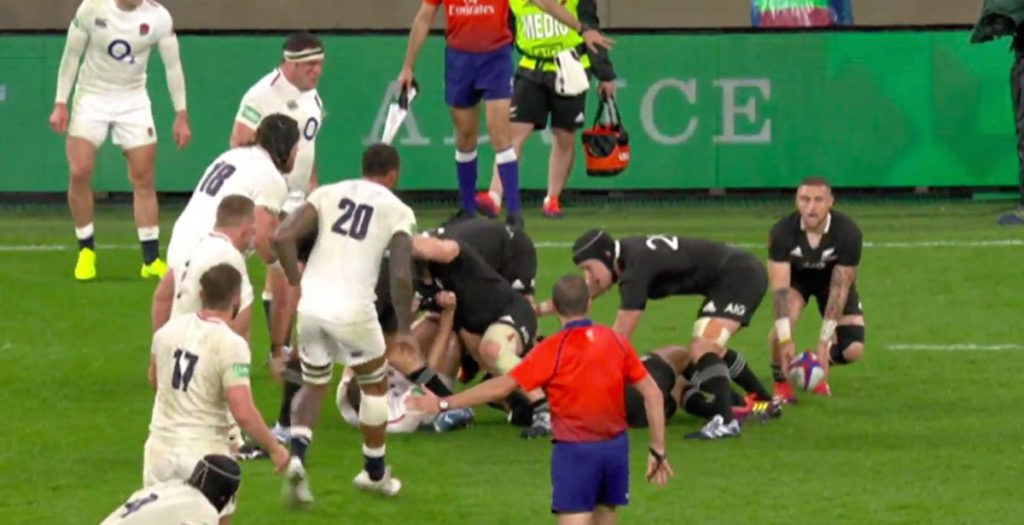 England lost at home to the All Blacks by one point yesterday but as with Owen Farrell’s tackle last weekend, this game was overshadowed by another controversial decision.

In the 74th minute of the game, replacement back row Courtney Lawes charged down a box kick from TJ Perenara, which lead to a try for openside flanker Sam Underhill but after a TMO review Lawes was judged to have been offside.

The kiwis went on to win the match 15-16 on a rainy day at Twickenham, but was it actually offside?

Sir Clive Woodward said: “You need the referee to shout ‘ball’s out’ [of the ruck]. If he shouts ‘ball’s out’ he’s onside. If he doesn’t shout that and he’s not refereeing the game properly it leaves it open to interpretation. This is 50-50 and how you interpret it.

“He’s got to be behind the back foot of the hind most person at the ruck. It’s a 50-50 call and like last week with the Farrell tackle. It can go either way.”

Unsurprisingly boos ringed around the stadium on the full-time whistle as England fans expressed their emotions, but the mood amongst their past and current players remains positive.

“We stayed in the game from minute one to 80, there was obviously going to be mistakes today with this weather but I’m proud of the way we stuck in there,” said Owen Farrell. “We can be more clinical, look after the ball better and that’s the difference.”

Proper test match today. Atmosphere was another level. Well done AB’s but in terms of next 12 months eddie Jones got more out of today than Steve Hansen @ Twickenham Stadium, Twickenham,… https://t.co/GxKWnquvgi

Outstanding games from many in the England shirts today. Really impressive. A few key lessons to be learnt, but defy anyone not to have been massively encouraged today

Farrell added: “I feel like we are growing all the time, we don’t want it all smooth sailing. We want to peak in 2019 (Rugby World Cup), of course we want to do well now and win…but we can use this, we’ve played okay, there is a lot to work on but we are pushing some of the best teams now and want to be the best.”

England’s next match is against Japan next weekend while New Zealand travel to Dublin to take on Ireland, both on 17 November.

Watch the full match highlights below: