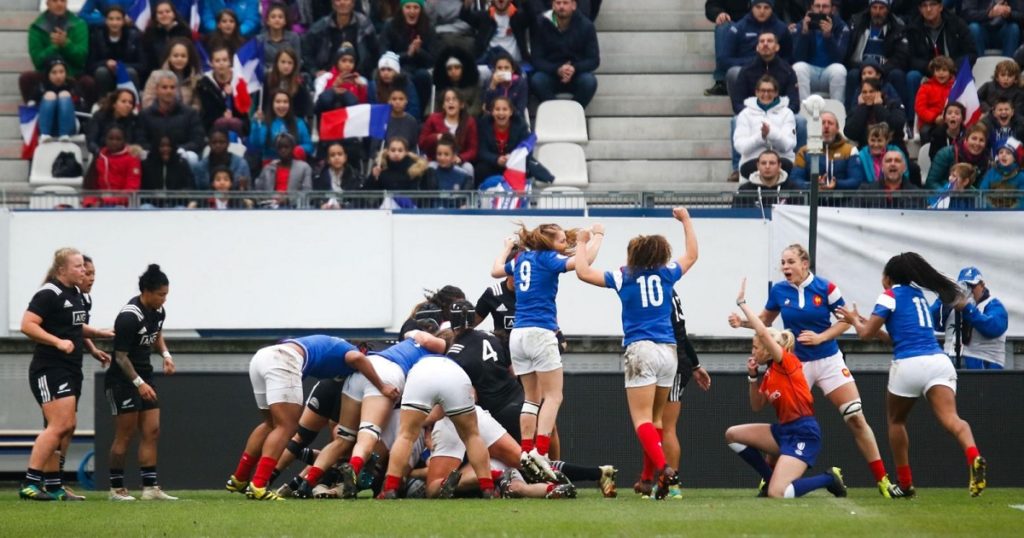 France Women beat the Black Ferns for the first time ever after a narrow 30-27 victory at the Stade des Alpes in Grenoble on Saturday. This came on the same day that the men, the All Blacks, lost 16-9 to Ireland.

In front of a packed 17,102 crowd, the home side bounced back from a 14-0 defeat to the same opposition last weekend in spectacular form by opening up a 19-7 lead inside the first 25 minutes.

Prop Julie Duval opened the scoring after six minutes following another powerful forward performance, which easily had the better of the Black Ferns last weekend.

Stacey Waaka responded for the visitors with a try under the posts following waves of pressure in the French half but France hit back in style through Maelle Filopon and the impressive Romane Méanger.

Back-rower Ménager scored arguably the try of the match, fending off several Kiwi defenders and running 55 metres for an almost identical try to the one she scored in last year’s Women’s World Cup against Australia.

Fiao’o Fa’amausili and Selicia Winiata hit back for the Black Ferns either side of Caroline Drouin’s superb score for the home side. Fly-half Drouin latched onto a sensational offload from Lenaïg Corson to streak in for the try to extend the French lead.

The Black Ferns suffered from a lack of discipline throughout the match and lost both Ayesha Leti-I’iga and Ruahei Demant to yellow cards.

Fa’amausili and Linda Itunu- both of whom were playing their final match for the Black Ferns – were unable to secure victory on their last competitive game for their country, but were allowed the chance to perform the Haka in front of their team-mates one last time.

A fitting farewell for two legends of the #BlackFerns 🖤👏🏼#FRAvNZL pic.twitter.com/hayveyaltC