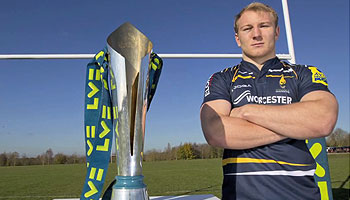 Far from being put out by suggestions he can become a future England regular, Worcester Warriors flanker Matt Kvesic positively embraces the talk as he targets a place in Stuart Lancaster’s squad.

Though keen to point out he needs to be performing regularly for his club side to have even a sniff of an international call-up, Kvesic does talk excitedly about the possibility of appearing at a home World Cup for the Red Rose.

By 2015, Kvesic may well be a regular at seven for his country, and he admits he has allowed himself to think about just that.

“I would love to kick on and play for England, hopefully in the not too distant future,” said the 20-year-old. “But at the moment it has been a bit of a slow start to the season for me and I just want to get some game time under my belt and really cement the seven shirt at Worcester.

“If I am playing well for Worcester in the Aviva Premiership and LV= Cup games then you never know what will happen, and in the few games after Christmas with the Saxons.

“It is an exciting time because you have something to aim for. Growing up that is something you want to do, win a World Cup and it is a motivating factor.

“But there is a huge journey until that World Cup and nothing is guaranteed whatsoever. I know I have a lot of work to do between now and then if I want to make a squad like that.”

The LV=Cup. Watch the next generation break through. For tickets & info visit www.lv.com/rugby